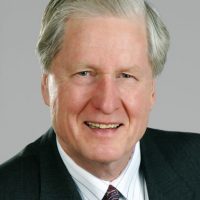 From 1972 to 1987 Gerald Wright was vice-president of the Donner Canadian Foundation. From 1987 to 2002 he served in the Government of Canada, including periods as special advisor to the Secretary of State for External Affairs and senior policy advisor to the Minister for International Trade. He has twice (1978-1979 and 2012-2013) been a visiting professor of Canadian Studies in Japan and in 1985-1986 he was study director of the Special Joint Committee of the Senate and the House of Commons on Canada’s International Relations. He was Skelton-Clark Fellow of Queen’s University in 2001-2002 and general manager of the National Electricity Roundtable from 2002 to 2008. He has been president of the Atlantic Council of Canada, vice-chairman of the Atlantic Treaty Association, president of the National Capital Branch of the Canadian International Council and a member of the Board of the Canadian Institute for International Peace and Security. He is currently a member of the Board of the Canadian International Council, the Canadian Program Advisory Committee of the Ditchley Foundation and the Advisory Council of the Ottawa Forum on Israel/Palestine.