Carleton has a piece of my heart 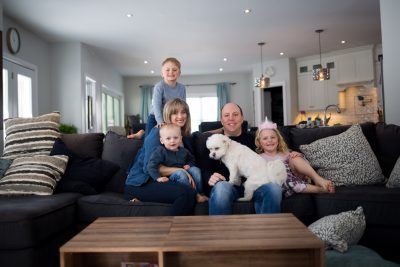 Chelsea McIntyre’s face beamed as she shared photos of her three children, 5-year-old boy/girl twins and a younger son, aged 2. She held her phone as she scrolled through a library of the trio with golden locks, paused at her handmade macramé planters, and ended at photos of trees perched along the infinite walking trail located behind her home in Kemptville, Ontario. As a 34-year-old woman, a wife and a mother to three young children, Chelsea was struck with pride as she talked about another unique addition to her growing family – her ‘charity child’.

An advocate for education and perennial learning, Chelsea uses the term ‘charity child’ to refer to charitable gifts made in her will, including future bequests to Carleton University, CHEO and the WDMH Foundation. Chelsea graduated from Carleton’s scenic campus just shy of eleven years ago, but vividly remembers strolling through the Quad as an undergraduate student in mass communications.

Chelsea gravitated towards giving to Carleton, as she shares the same values and commitment for inclusivity and accessibility. As a student who was heavily involved in the Carleton University Students’ Association, she felt empowered and inspired by the activism and passion of our vibrant community.

Chelsea’s fervor for making a positive impact as a new graduate in 2009 led her to work in the non-profit sector and fundraising. In her personal and professional life, she has the opportunity to work with, and volunteer for, a variety of meaningful organizations. So, she felt that supporting charity in her will came down to asking herself three questions – “Where is my heart? Where are my memories? Where was I most impacted?” Carleton was an obvious answer.

Leaving a gift by will to Carleton felt inherent for Chelsea, who left her gift undesignated, as she is confident that Carleton will allocate the funding to a priority area that will have the greatest impact. “I trust in the values of the organization to do what is best for its growing student population, and what will contribute to the greater good.” Chelsea is the first to acknowledge that she does not have the capacity at this time to make a significant current gift. But, she considers that the future bequest from her estate allows her to make a meaningful contribution when it makes sense for her and her family.

As a proud alumna and loyal donor, it is undeniable that Chelsea will always be an integral part of the Carleton community. As she says, “Carleton has a piece of my heart. These tunnels and this community were in my heart before I even had kids. I am part of Carleton, and now, it is part of my impact in this world.”