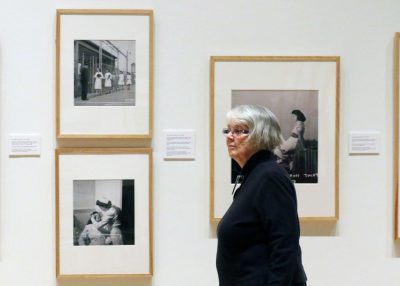 Dolores Young attends “The Other NFB: The National Film Board of Canada’s Still Photography Division, 1941-1971,” an exhibition curated by Carol Payne and Sandra Dyck, presented at Carleton University Art Gallery from 27 February – 7 May 2017

Dolores Young (B.A.Soc/Anthro, 1982) and her husband Harold love to travel—they’ve been everywhere from South Africa and India to Antarctica and Russia—and Dolores credits her sociology and anthropology courses at Carleton for stoking her interest in the wider world. “It was while I was studying here that my travel bug got ignited and fanned,” she says.

To help Carleton spark similar enthusiasms in new generations of students, the Youngs have been long-time donors to the university. They have contributed to the expansion of the MacOdrum Library and to financial aid, such as scholarships, and they have made arrangements for a bequest to Carleton.

Dolores has also participated in a wide range of Learning in Retirement programs and is a keen attendee at alumni luncheons, lectures and other activities. “Even today, Carleton is meeting my needs by offering great learning opportunities and social events!” Dolores says with a chuckle.

Her relationship with the university extends back more than 40 years. When she and Harold moved to Ottawa in 1974 from the Maritimes, they had two teenagers. With her kids getting older, she was looking to try something new. “I was sort of at a crossroads,” she recalls. “Carleton came to my rescue.”

She wanted to become an educator, but she didn’t have all of the prerequisites for many post-secondary programs and family finances were a bit tight. That’s where Carleton came in, by accepting her as a mature student and by offering her an on-campus job in the continuing education office. “They allowed me to get the training I needed to pursue my career.”

After earning her Carleton degree in 1982, she took an education degree at the University of Ottawa. Then, she embarked on a career that included three years of teaching at Indigenous elementary schools in Canada’s North, as well as two years working at a teacher’s college in Poland just after the Berlin Wall came down, and a year teaching English as a second language to businesspeople in Prague.

She speaks of those experiences—particularly her time in Tuktoyaktuk in the Northwest Territories and Nanisivik in what is now Nunavut—with great fondness. “That was a fantastic learning experience. I don’t know if the students learned anything from me! But I learned lots from them and from that community.” She hopes to give other Carleton students the same chance to enjoy rewarding work and travel.

“The reason I’m giving now and through my estate is because I credit Carleton with giving me that first push, that impetus, into some of the things I have later done and found very exciting,” she explains. “We hope our support will encourage other students, and support them on their journeys and in their careers.”