From Carleton to Paris: A Legacy of Compassion 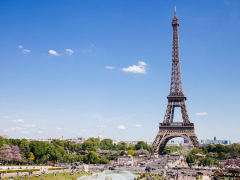 “He wrote to me once a week from Paris about his personal travels.” Marilyn Dimeo recounted fond memories of her brother, Robert Ellsworth Barry, as the sun peered through the windows of her eclectic home in Stratford, Ontario.

Robert’s admiration for journalism stemmed from his childhood—years filled with laughter and inquisitiveness. As a voracious reader of literature, skillful wordsmith and compassionate teenager, his path towards being a journalist was forged from a young age.

“He had this family trait that he couldn’t stay still in one place, and was intensely interested in the world, its issues and getting to understand them,” says Marilyn. Shortly after graduating from Carleton in 1964 with a Bachelor of Journalism degree, Robert was well on his way to fulfilling his lifelong aspirations to be an international reporter.

Following a stint at a local newspaper in Saskatchewan, he took flight to join Reuters in New York and London, before landing his dream job as a reporter for Agence France-Presse at their headquarters in Paris, France. His immense curiosity and innate passion for global issues led him to travel all over Europe and the Mediterranean for the duration of his career.

After Robert’s sudden passing in 1986 at the age of 44, Marilyn felt compelled to do something positive to preserve her brother’s memory in a way that was reflective of his life’s work. This led her to establish the Robert Ellsworth Barry Scholarship, which would be funded by a gift in her will. In 2019 she decided to activate the annual award with a current gift to support travel and research expenses for a graduate student pursuing a Master of Journalism degree.

This endowed scholarship will help develop compassionate leaders in the newsrooms of tomorrow, by empowering students who share his conviction to make the world a better place through journalism. Marilyn is optimistic that Robert’s profound love for the field will serve as a source of inspiration for these students.

When asked about the process in establishing the endowment, Marilyn commended Carleton University for its professionalism and benevolence. “When I contacted Carleton about making the gift, the team was great to work with. They made it easy and straightforward,” says Marilyn.

Through this award, Marilyn is planting the seed to continue her brother’s legacy for generations to come. “I am connected to Carleton through my brother, and this award helps to maintain that connection in a meaningful way,” explains Marilyn. She hopes that the selected recipients will aspire to continue Robert’s wish-to help spread awareness about global issues and how we can make an impact as Canadians.