Giving Back to the School that Shaped Her 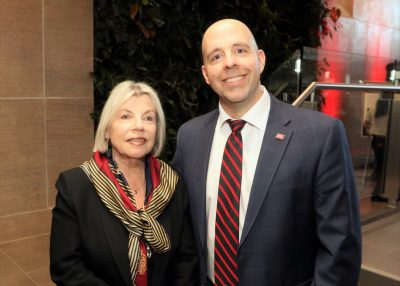 Carol Lutes Racine (B.J., 1962, B.A., 1964) says her Carleton years gave her a solid foundation for success. “University is such an important part of your life…it shapes you forever,” she notes, adding that she was one of the first students to attend classes at what was Carleton’s new campus in the early 1960s. “It was a wonderful place to be—very small, very cozy.”

She started in the arts program, but switched to journalism after meeting professor Wilf Kesterton on the bus to school and falling into wide-ranging philosophical conversations with him. “He was a truly memorable mentor who inspired so many J-School graduates.”

Her new major opened her eyes to all sorts of topics. Journalism, she says, “gives you a big perspective on the world as a whole.”

Right after finishing her bachelor of journalism at age 20, she became a reporter at the Ottawa Citizen. That job inspired a deep interest in public policy, so she went back to Carleton part-time to complete her bachelor of arts degree and post-graduate studies in communications research at Columbia University’s American Press Institute.

Eventually, she began an illustrious public service career, spanning some 30 years, starting as the founding director of the federal government’s first Office of Equal Opportunities for Women, set up in response to recommendations of the Royal Commission on the Status of Women. Later, she served as director-general of communications in several government departments and agencies, among them, Global Affairs Canada. She now focusses on international and public affairs consulting projects, both in Canada and abroad, and on-going volunteerism and philanthropy in the arts, health and education sectors.

A strong believer in giving back, she began making modest donations to Carleton in response to fundraising campaigns in the 1980s.

After her husband—retired journalist and public service communications executive Loris Racine—passed away in 2015, she made a significant donation to his alma mater, the Université de Montréal. That prompted her to start thinking about ways she could make a similar contribution to Carleton. In 2016, she established the undergraduate Carol Lutes Racine Scholarship in Journalism and Communication, which she will continue to support through a gift in her will.

Recently, she decided she’d like to amplify her support for Carleton and asked her financial advisor for assistance in making a gift of life insurance. An article in Giving Insight several years ago had introduced her to this type of donation.

Setting up the insurance gift took her several months due to the ongoing pandemic and involved steps such as filling out a detailed health questionnaire. Despite the time required, Lutes Racine would highly recommend the option to others.

“It’s a very, very useful tool,” she says. As well as its tax benefits, it’s a good way to make a lasting impact. “It means that I’ll be involved forever with Carleton, and I like the idea of that.”