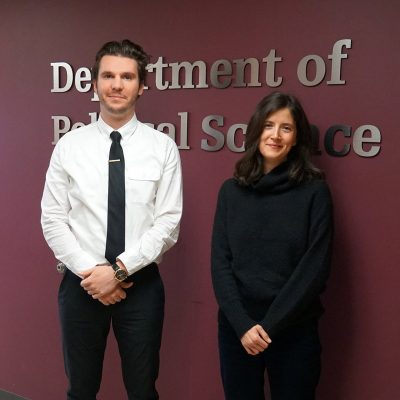 The Pollara Statistical Confidence Award is given to those students who produce the best quantitative analysis papers at an advanced stage of their studies and who have been associated with the Department of Political Science through course work or supervision.  Pollara Strategic Insights is a major Canadian research company that has been sponsoring these awards for since 1998.

This year’s winners are Michael E. Campbell, a doctoral student in Political Science and Zoe McKnight, a recent graduate of the Political Economy MA program now employed as a policy analyst at the Labour Program which is part of Employment and Social Development Canada .

Michael researches democracy and corruption, and his award is given for his work in Political Science 5701 where he wrote: Regulating democracy: The effects of political finance regulations on democratic quality and political corruption

Zoe researches the relationships between precarious employment and various forms of participation in politics and society. Her MA thesis is entitled: Precarious work, “harmonizing down” and economic anxiety: Implications for citizenship and society

Both Michael and Zoe were supervised by Scott Edward Bennett of the Department of Political Science.