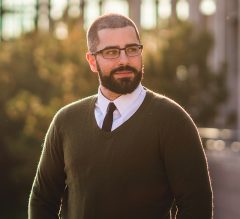 Noah’s SSHRC-funded research, supervised by Dr. Mira Sucharov, seeks to better understand the impact of the National Rifle Association (NRA) on the gun control debate in America. It focuses specifically on the organization’s use of narratives about America’s past, and its mobilization of collective memory to build the second amendment community from which it draws political strength.

Noah hopes that his research will help scholars to better understand the role that narrative, memory and community building play in the policy process. Further, through making the voices of ordinary gun owners heard in academia, he hopes to increase our understanding of all sides of the American gun debate, reframing it in language that allows both sides to engage in deliberation.

Noah will be be presenting his research as part of the Political Science Speaker Series on Tuesday, September 24, 2.30 pm, A602 Loeb.
Inside the NRA – Narrative, Culture and the American Gun Debate