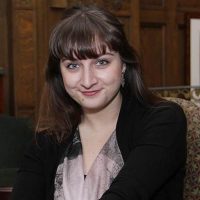 On the day we reach Anca Gurzu by phone in Brussels, there’s been a terrorist attack on a Christmas market in Berlin. Ms. Gurzu is following the news closely—not only as a journalist in Europe, but as a resident of Brussels, which was hit by terrorist attacks just nine months earlier. One of the three suicide bombings was at a metro station in central Brussels, 400 metres from Ms. Gurzu’s office.

“I remember my reaction was that I needed to go to the scene, to see what happened and to report,” she recalls. “I could see ambulances and the police and even some victims, but it was blocked off. I spent all day talking to Canadian media about what happened. But when the adrenalin disappeared by the end of the day and I was walking home, I felt really terrified.”

Still, her love of the city never wavered.

“I never considered leaving because it was my dream to live in Brussels,” she adds.

Ms. Gurzu first visited the city in 2009, after winning the Canada-EU Young Journalist award in her last year of university. She spent a week talking to EU policy makers and exploring some of the societal contrasts that make up the various parts of the EU’s capital, which she would later call her home.

Ms. Gurzu’s interest in Europe began early. She spent her childhood in Romania and moved to Canada with her family while she was in high school. She describes herself as a shy student initially.

“When I started j-school, I was not comfortable talking to strangers,” she recalls. “But it fundamentally changed how I go about my life, because I had no other option but to pick up that phone and dial. It made my life so much richer, both professionally and outside of work.”

“It sounds a bit nerdy, but I was always very excited to report on this topic,” she recalls.

In 2011, she returned to Carleton to pursue a Master of Arts in European, Russian and Eurasian Studies. The program’s EU Study Tour helped her secure an internship that enabled her to return to Brussels, deepening her knowledge of Europe. After she finished her studies, she was offered a job there.

A month into her new job and life, she even had a chance to watch then-Prime Minister Stephen Harper announce the Canada-EU Trade Agreement (CETA).

“I remember being at the press conference and thinking how many years I’d been writing about these negotiations. It was finally happening. For me, it was a reflection of what I had achieved thus far,” she recalls.

Today, Ms. Gurzu is an energy reporter for POLITICO, a focus she carved out after recognizing the importance of energy policy in Europe.

“Every winter, people talk about the tensions between Russia and Ukraine and worry about potential cut-offs of heating fuel,” says Ms. Gurzu, who recently flew by helicopter to visit an offshore gas platform in Norway. “Everything we do is so dependent on energy.”

She credits her success thus far to a combination of factors: her curiosity, her determination to write about EU politics, the people she met who advised her well, her penchant for researching good opportunities, but also to a healthy dose of good luck.

“There are significant decisions made in Brussels that affect the rest of Europe, so I feel quite happy to be here,” she says. “I hope to continue to make sense of some of these developments that could affect the lives of everyday people.”