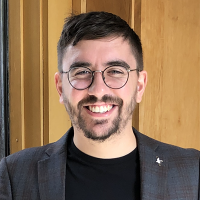 James Patriquin (BA-H, MA) is a collaborative PhD candidate specializing in Political Economy, Comparative Politics, and International Relations. James obtained his BA in Political Science (Hons.) and Economics at Saint Mary’s University, where he was also deeply involved in student politics and social activism. Beginning at Carleton in 2015, James completed his MA in Political Science in just one year and has continued his graduate studies under the direction of Dr. Randall Germain.

James is currently an instructor and has taught courses on democracy, the political economy of global finance, and international political economy. His research interests include monetary and financial governance, critical IPE, postmodern and postindustrial political economy, cryptocurrencies and “tokenomics”, and more generally, the intersection of social inquiry and computer science. His dissertation project uses critical theory to interpret and historicize the meteoric rise of digital money, as well as the more recent proliferation of decentralized finance and central bank digital currencies. James is a lead research assistant for Dr. Caroline Hossein’s project ‘The Black Social Economy’, which maps a number of worker cooperatives run by immigrant women across the Greater Toronto Area. He is also a researcher for the Diverse Solidarity Economies (DiSE) Collective.

Patriquin, J. “Is it too late to get onboard the blockchain train, or have we already been left behind?”. (7 May 2018). Ottawa, ON: The Hill Times.