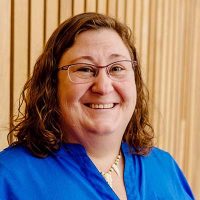 While she’s an expert on Indigenous governance in Canada, one of Dr. Kiera Ladner’s most memorable experiences occurred not in Canada, but in Australia, when she was in the North to consult with Elders and community members on Indigenous issues.

“I was floored when I travelled to a remote area of Australia and grandmothers and grandfathers stood up and talked about sections 25 and 35 of the Canadian constitution,” recalls Dr. Ladner, who received a Social Sciences and Humanities Research Council (SSHRC) grant to examine Indigenous constitutional politics in Canada, New Zealand, and Australia. “They wanted to know how they could use the Canadian framework as a guideline.”

Dr. Ladner was surprised that they held these sections of the Canadian constitution in such high esteem, especially when Aboriginal and treaty rights have largely been ignored in Canada.

“The treaties and Canada’s constitution offer the possibility of a mutually agreeable and mutually beneficial arrangement allowing two nations to live in a shared territory,” says Dr. Ladner. “Those agreements are in the 1982 constitutional framework. But Canadians don’t want to deal with that history.”

Growing up in a tough neighbourhood in Calgary, Dr. Ladner says she never would have predicted that she would one day be an academic—a word warrior, a constitutional scholar and a “translator” of Indigenous political thought in a Eurocentric world.

“Not in my wildest imagination did I ever think I would be doing this,” she laughs. “I got kicked out of schools. In grade 9, my academic advisor tried to convince me to go into hairdressing or a trade. But I knew I was smart enough to do something bigger.”

She applied to Mount Royal College, despite an expectation that it would be just like high school: “teachers teaching to the bottom end.” Then she walked into Professor Yusef Umar’s political science class.

“He had me from day one. He put his Palestinian birth certificate on the overhead projector and said it was a political object because Palestine was thought to no longer exist. That led to a conversation about colonial nations and settler societies,” she recalls. “He engaged me in a way no one else had. It was the start of my academic career.”

Her path was solidified when she studied constitutional politics in her fourth year at the University of Calgary.

“That’s when I realized that the constitution could provide a framework for multiple nations living together on Indigenous lands,” says Dr. Ladner. “My professors urged me to apply the tools of political science to Indigenous governance and to develop my own tools based on Nehiyaw political traditions and Indigenous methodologies.”

“High profile politicians, lawyers and judges think they can talk over a community. But Aboriginal people know what they want. Every Indigenous nation has their own political traditions and if one opens their mind to listening, they find a whole different way of moving forward,” she says.

Dr. Ladner recently finished a stint as Canada Research Chair in Indigenous Governance and Politics at the University of Manitoba. She acknowledges that sometimes, she feels like walking away from this work. But she keeps returning.

“It’s frustrating to still be dealing with the same issues I dealt with as an undergraduate,” she says. “But this is exactly what I want to do: to encourage the next generation to get involved, think through the issues and work with communities. There isn’t anything better than that.”