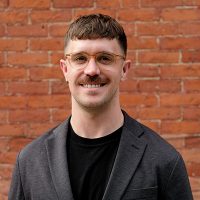 Leonard Halladay, BA (Alberta), MA (Ottawa) is a PhD Candidate in the Department of Political Science and the Institute of Political Economy. Leonard began his PhD after working in research at the Senate of Canada and serving as Stakeholder Relations Coordinator to the Hon. Catherine McKenna at the House of Commons.

His research looks at the effects, outcomes, and consequences of political and economic liberalism on the lived experiences of queer and trans people. His doctoral dissertation, supervised by Marc Hanvelt, draws jointly on contextual political theory and critical political economy to explore the relationship between identity politics, social movement activism, and the combined discourses of diversity and inclusion central to Canada’s liberal nationalism. By mapping this terrain, Leonard seeks to understand how queer and trans ways of being and knowing challenge orthodox conceptions of belonging and the extent to which Canadian liberalism places limits on realizing justice for these and other equity-seeking groups.

Leonard serves as Secretary on the Steering Committee of Queer Ontario, a provincial network of 2SLGBTQ+ people and their allies, who are committed to questioning, challenging, and reforming the laws, institutional practices, and social norms that regulate queer people. He has also served on the Board of Directors of MAX Ottawa, a community-based organization focused on fostering better health outcomes for gay, bisexual, Two-spirit, queer, and other guys who are into guys, both cis and trans, in the National Capital Region.

Leonard is currently a Visiting Researcher in the Department of Political Science at the University of Toronto. A recipient of awards and fellowships from Carleton University, the Government of Ontario, and the Social Sciences and Humanities Research Council of Canada, Leonard’s research and teaching interests are in modern and contemporary political theory, Canadian politics, and critical political economy.