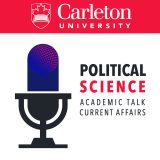 Politics is about more than just policy and governance — it touches nearly every aspect of our lives. To help you make sense of the political world around us, the Carleton University Political Science Podcast “Academic Talk Current Affairs” features expert analysis on the state of politics and global affairs from the faculty and graduate students.

August 2022: Kim Nesbitt on the Fall of Roe vs Wade and the Fight for Reproductive Justice in the US And Canada

On June 22, 2022, a moment long-feared by women and the supporters of civil rights across space and partisan lines came into fruition in the United States with the overruling of Dobbs versus Jackson Women’s Health by the American Supreme Court, effectively dissolving constitutional protections over the right to legal abortions for American women as a right of privacy. As the ink on the decision dried, trigger states in the American south immediately enacted state laws banning abortions – even in life-or-death situations – some going as far as seeking to frame the medical procedure as a crime tantamount to murder. The decision was condemned by not only by activists in the American reproductive rights community, but policy makers, world leaders and observers across the planet as an ideologically driven attack on women, and an example of the institutional decay caused by the politicization of the judiciary.

While the decision was met largely with anger and derision, one thing it wasn’t met with was surprise. Indeed, the domination and control over women’s bodies in the United States is an issue that arguably stretches back centuries to the birth of the nation, and since the Supreme Court’s decision over Roe vs. Wade in 1973 established a woman’s right to bodily integrity, personal freedom and privacy, those very rights have been under attack by American right, pushing the an antagonistic view of right to privacy and women’s health to the core of the Republican identity in the decades since.

Why has the American right been so preoccupied with the elimination of women’s rights and freedoms? How have actors within civil society mobilized in the weeks since the decision? And what does this mean for the protection of reproductive rights in Canada amidst a resurgent anti-abortion movement emboldened by the American example? To discuss these questions and more we spoke with Kim Nesbitt. Kim is an in-coming PhD student with the Department of Political Science specializing in reproductive justice and international relations. She is also a strident activist in the reproductive justice community in Canada.

March 2022: The Politics of the Game - Round 3 with Aaron Ettinger

Politics and sports – despite our best attempts at telling ourselves otherwise – are inherently chained to one another. One need only look to Eminem ‘taking a knee’ as an act of solidarity with Colin Kaepernick and the Black Lives Matter movement this past weekend at the Superbowl halftime show to see how the field, the pitch and the arena are hardly apolitical. The world of sports is political, and politics will always be subject to the eyes of athletic activism – this is an unalienable truth going back to the days when Muhammad Ali protested the American government by refusing the draft to fight in Vietnam, or the iconic moment when Tommie Smith and John Carlos made the salute to “Black Power” at the podium of the Olympics, on a warm night in Mexico City back in 1968. In more recent years, anti-racist activism has become embraced by athletes from across leagues, perhaps reaching its height during the 2020 season when athletes from the NBA and WNBA, Major League Baseball and even the ever-militant NFL placed the fight against racism and police brutality to the forefront of the game.

But now, two years removed from that season of revolution, the ways in which politics has manifested on the field, the pitch and the arena has taken on a very different tone, with many athletes no longer reflecting the call for racial justice, but rather the chorus of anti-politics and conspiracy that has become endemic of right-wing politics in the pandemic era. How has the COVID-19 pandemic impacted athletic activism across leagues? How have anti-vax figures like Aaron Rogers and Kyrie Irving impacted the broader political environment? And what are the political implications to be drawn from the Winter Olympics currently taking place in Beijing? On this special episode of the Carleton University Political Science podcast, we will tackle these questions and more as we present our third annual episode charting The Politics of the Game with Professor Aaron Ettinger. Dr. Ettinger is an assistant professor with Carleton University’s Department of Political Science specializing in international relations, American and Canadian foreign policy and international political economy.

February 2022: Laura Macdonald on Mexico and the Three Amigos in the Era of 'America's Back'

“So far from God, so close to the United States”. Porfirio Diaz’s infamous words describing Mexico’s relationship with the United States in many ways still ring true today. Whether through economic integration, the War on Drugs or even the steady stream of citizens and dollars moving across their shared border, the social, political and economic fate of Mexico remains as tied to its neighbors to the north today as it did in those early days following the Mexican revolution over a century ago. That relationship has seen its fair share of crests and waves, with the Presidency of Donald Trump heralding a potential low point in its discursive construction of its North American neighbor as a threat and the physical construction of a wall to keep so-called bad hombres out of the United States along the way. In many ways Mexico marked the first and arguably most consistent victim of Trumpian vision of ‘America First’, and though we are a year removed from the end of that vision one cannot help but wonder just what the Biden administration’s vision of a return to an American led liberal international order means for its Mexican neighbors and the North American continent more broadly. How has ‘America’s Back’ changed US-Mexican relations? What are Mexico’s developmental prospects under the revised CUSMA? And what role will Canada, that often overlooked ‘Third Amigo’, play in Mexico’s future political and economic prospects? To discuss these questions and more I am joined this week by Professor Laura Macdonald. Dr. Macdonald is a professor with the Department of Political Science at Carleton and a prolific specialist in the politics of Latin America and North America, as well as democracy and civil society.

As a system of governance, democracy has come to define institutions and administrations the world over, and is one of the enduring characteristics of the modern nation-state. The success of democracy requires a sense of decorum – the peaceful transfer of power, competition coinciding with respect for one’s political opponents. But in recent years, the democracies of the western world have seemingly reached an impasse in this regard, enduring a rising tide of political polarization that has pushed incivility from the political fringe to the political mainstream.
The question of how to stem this trend of polarization has become one of the defining issues of our time for democratic scholars, comparativists, security specialists and political theorists alike – and sadly no easy answers have emerged from any discipline.

Perhaps the key to this issue isn’t found in the politics of our time, but rather the philosophy of the past. Indeed, the ingredients necessary for democracy to function were a deep preoccupation of the philosophers of the classic era, and on this episode of the Carleton University Political Science Podcast we discuss one such ingredient that is often overlooked: that of friendship. How is friendship political, and what is the role of friendship in democracy? And in what ways does friendship, or perhaps more accurately a lack thereof, help explain this current impasse of incivility seemingly haunting the contemporary democratic world?

To answer these questions and more we spoke with Ali Elyasi. Ali is a PhD candidate with the Department of Political Science specializing in ancient political theory, Islamic thought, and democracy.

September 2021: Professor Jonathan Malloy On #ELXN44 And Why Campaigns Matter....Sometimes

In many ways, the campaign trail of the 44th Federal Election has been a campaign unlike any other in Canadian history. Called amidst a resurgence of COVID-19 infection rates due in large part to the delta variant, the campaign has seen the Liberal and Conservative Parties of Justin Trudeau and Erin O’Toole respectively at dead heat since the drop of the writ, with the only predictable outcome being that the next government of Canada will likely be a minority government.

But the most pronounced aspect of the campaign may not be its potential outcome, but the ways in which public discontent has been mobilized in fragmented and even violent ways, targeting candidates, their staff and in particular Prime Minister Trudeau himself along the campaign trail.

As the campaign reached its final days with election day looming just around the corner, we spoke with Professor Jonathan Malloy about the campaign and the prospects ahead for the 44th parliament of Canada. Dr. Malloy is a professor with Carleton University’s Department of Political Science specializing in Canadian political institutions, and religion and politics; he is also the current Bell Chair for the study of Canadian Parliamentary Democracy and the Faculty of Public Affairs’ Associate Dean of Research and International.