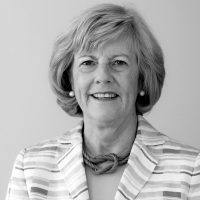 Jodi White’s career spans the nexus of public policy, journalism, the private sector, and the nonprofit sector. She was involved at a senior level in six federal elections campaigns, serving as Progressive Conservative national campaign chair in 1997. In 1993, she chaired Jean Charest’s bid for the party leadership. In government, she served as Chief of Staff to the Foreign Minister and Chief of Staff to the Prime Minister.

In the private sector, she was Vice President (Corporate Affairs) for Imasco Ltd, a major multinational conglomerate. As an entrepreneur, Jodi founded Sydney House consultants and co-founded The Neville Group. She started her career as a television news reporter and subsequently worked as a senior radio producer at the CBC. She serves on several nonprofit boards, including the National Theatre School of Canada (as chair of the board), Tides Canada (where she is past chair of the board), the Canadian International Council, and the Trans Canada Trail. In 2013, She received the Order of Canada for her work in philanthropy and for her contributions to public dialogue in Canada.