Our study of Eastern North American prehistory began in 2010 with caribou range reconstruction of southwestern Ontario and the adjacent states of New York and Michigan. This successful model showing overlapping herd ranges and hunting territories was based on a dozen field seasons surveying, locating and excavating 1004 Canadian Barrenland archaeological sites where hunters from the 8000 year-old1 Plano period to the Present relied on caribou. Using artifacts from C14-dated levels involving four very different traditions, we were able to assign surface sites to phase. We needed to do this to investigate long-term use of each water-crossing.

Seasonal herd observations by field crews and wildlife biologists during aerial surveys, plus past sightings by Hearne in the 1770s and later explorers and canoeists permitted the start of herd range reconstruction. We found that the 1970s and 80s Beverly herd range borders were conservatively maintained for several centuries. 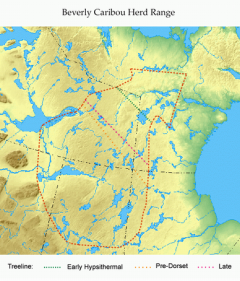 We then tested hunter territorial continuity over time by flying, canoeing and walking well outside the known Beverly range. We surveyed up to the Back River to the north, Artillery Lake to the west, the Dubawnt River to the east and Churchill River to the south. Over a dozen years we found 1004 sites with no sites outside the range. This confirmed an overlap of hunting territory and herd range for each single band for 8000 years. Their borders remained stable throughout very warm postglacial times and the very cold 1500-700 BC Pre-Dorset Inuit-like period. 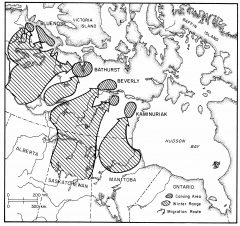 We found that hunting territory and herd range overlapped in Ice Age France with reindeer, an interbreedable cousin of caribou. Using camp seasonality determined by measuring reindeer tooth cementum increments, I tracked Magdalenians hunting reindeer 17,000 years ago (17K) throughout the country, reconstructing a half-dozen herd ranges and hunting territories. Unsatisfied with two regions and wanting more proof, I did the same in Mesolithic northern Soviet Union (later Russia) using metric and non-metric comparison of blades and other tools, knowing there should be shorter worn conserved ones in the herd’s winter range because toolstone sources were distant and snow-covered, like I found in the Barrens.

While working in the Northern Hemisphere for several dozen years, I found that Eastern North American (ENA) archaeologists had reached an impasse interpreting widespread usage of their Palaeoindian (PI) sites. Some had caribou remains but the many that didn’t were thought by their investigators to represent caribou hunting. After proving overlap of ranges and territories in the three above regions, I thought I could help ENA archaeologists using a broader approach to their huge area. This required knowledge of herd and hunter behavior throughout the year, something that GIS tools could help bring a new perspective on.
1 All dates are uncalibrated.
Read More