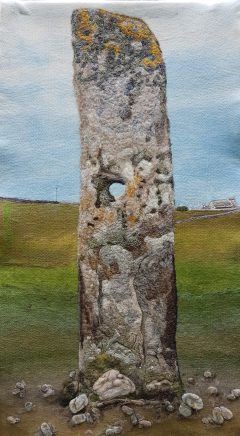 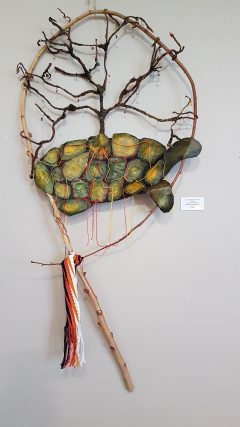 The above two images sum up the most important theme of this art exhibition: healing our ancestors through visual stories. They reflect a process which began as a personal reconciliation between a non-indigenous artist/educator (myself) and a Métis artist, Lise Perras, who began introducing me to her Métis and First Nations communities in Ottawa a couple of years ago. As artists, we discovered we had similar sensibilities towards our ancestors (Algonquin/French and Orcadian/Shetlander). We discussed possibilities of how they might have encountered one another in this country and how we might turn that encounter into an exhibition that could offer Canadians unique insights into indigenous/non-indigenous relations without falling into ideological narratives. Through many conversations, we discovered that our cultural and familial identities were linked first by a reverence for ancestors and second by the history of the fur trade on the Ottawa river. Given our Religion program’s offerings of courses in Indigenous traditions, students might be more familiar with the Turtle Island Indigenous creation story which tells the narrative of the first ancestors of the Anishinaabe nation and the making of the Earth , captured by Perras’s multi-media 2020 artwork, “Île Tortue/Turtle Island”. Less familiar, I will assume, is the story of Neolithic Orkney ancestor worship since Neolithic religions typically are not part of Religious Studies courses in Canadian universities – including ours. Nonetheless, it is the latter subject matter that inspired my “Orcadian Ancestor, North Ronaldsay” (2019) tapestry – a representation of a single “guard” stone found on my father’s island of birth.
Some of you might remember that Nick Card (University of the Highlands and Islands, Orkney) gave a presentation on Neolithic Orkney in 2017 to the College of Humanities on “The Secrets of the Ness of Brodgar”. The Ness is a World Heritage designation and currently an archaeological site on Mainland Orkney. “Orkney” is made up of a group of 60 plus islands off the north coast of Scotland; the largest island is referred to as the Mainland. One of the “secrets” divulged by Card and others’ research is a centralized building complex near a narrow strip of land between two lochs (lakes) where scholars theorize that “clans” from all over Orkney during the Neolithic period (4000-2400BCE) came to a central meeting place – the Ness of Brodgar – to feast and possibly exchange gifts at critical times of the celestial year. As recognized by the World Heritage organization, the Ness of Brodgar in Mainland Orkney is “ground zero” for countless Neolithic burial mounds (e.g. Maes Howe) and stone circles (e.g. Ring of Brodgar) – sites that are older than Stonehenge. Like the standing stone from North Ronaldsay, Orkney, depicted in my needle-felted tapestry, some of the entrances to the burial mounds align with the setting sun of the winter solstice. As you can imagine, there are all sorts of theories and scholarly disagreements regarding the interpretation of this physical phenomenon. The one fact that can be established from ongoing archaeological work is that Neolithic Orcadians were not indifferent towards their dead. Whatever their cosmological story was, we do know that the sun was a key player in this narrative.

Leaping eons ahead in time and ignoring Skara Brae, a Neolithic site also on Mainland Orkney, the circa first century defensive brochs found throughout Shetland and Orkney (including North Ronaldsay), and the Viking domination of Shetland and Orkney, circa 1000AD (see The Orkneyinga Saga), we arrive in history at the British crown’s royal charter of 1670AD. This charter served as the original articles of incorporation for the Hudson’s Bay Company. Allow me to quickly add that the injustice and audacity of the British Crown to claim, as legal, an exclusive trading monopoly over the entire Hudson Bay drainage basin on a territory it named “Rupert’s Land”, is not in dispute here. The need for national reparation and conciliation with First Nations people for our colonialist past is profound and ongoing. What was of interest to myself and Ms Perras was the possibility of how our ancestors might have encountered one another in this country based on a little known fact that by 1799AD, almost 80% of all individuals hired by the HBC to man their fur-trading posts in “Rupert’s Land/Turtle Island” were from Orkney.
For this exhibition, we hypothesized that both sets of ancestors (Algonquin and Orcadian) met during the active years of the fur trade, became economically co-dependent, and partook in intermarriage relations (see Hudson’s Bay Archives). While myself and Ms Perras cannot – for the moment – draw a direct link between our families during the fur trading days on the Ottawa river, we know that Portage du Fort, the site of our joint exhibition, as its name suggests, was the key site where the Algonquin made their portages on route to Fort Coulonge, upriver, where a trading post had been established as early as 1685AD. The same trading post was later taken over by the Hudson’s Bay Company.
While Ms Perras and I acknowledge the pain and suffering inflicted on both sets of ancestors by the British Crown (Orkney and Shetland became part of Great Britain in 1707), there is no question between us that Indigenous populations suffered far worse consequences from colonialism. It is our shared view that before conciliation can take place between the descendants of our ancient cultures, we must first acknowledge the threads and ties that have bound us together over the centuries and have brought us to this moment in time – before we can heal the quarrels of the living. As we have found, when one digs deeper into the religious traditions of both sets of ancestors, only briefly alluded to here, one finds symbols, stories, shamanic practices, and spiritual characters that indicate more commonality than difference among us. It is predominantly these religious commonalities that we represent in this exhibition as a way of paying our respects and healing the wounds among our ancestors.