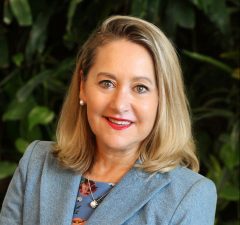 A veteran journalist and established communicator, Jane Taber joined the Carleton Board of Governors in 2019 as a community-at-large member. A proud graduate of Carleton’s School of Journalism, Jane spent the bulk of her career as a political reporter and columnist on Parliament Hill. Now, in addition to lending her voice to the Board of her alma mater, Jane serves as Vice President of Public Affairs at the NATIONAL Public Relations’ Toronto office.

Jane grew up in a household with a keen interest in politics and government, and she credits this upbringing for the political direction of her career. After graduating from Carleton, Jane spent 25 years working on Parliament Hill for a series of Canadian publications, but claims her interest in politics started much earlier.

“When I was really young, as early as eight years old, my parents were really into politics… and they certainly had strong views, which we would talk about a lot.” Jane explained. “My generation grew up watching Prime Minister Pierre Elliott Trudeau and political conventions that were on TV for the first time. It was very interesting for me to see.”

With a passion for politics and a desire to become a journalist, Jane’s decision to study at Carleton University was a no-brainer. She wanted to be in the nation’s capital, and she sought a diploma from the best School of Journalism in the country.

“Carleton was one of the best experiences I ever had – I just loved campus,” described Jane. “I lived in residence in my first year, Glengarry six… and a couple of people I met are still my close friends. My husband was at journalism school in my year, so I met him on campus as well.”

As a student, Jane wasted no time in getting involved in politics, and joined Flora MacDonald’s campaign as she competed for leadership of the Progressive Conservative Party of Canada. Jane was excited to see a woman vie for the leadership role, but was discouraged by the challenges MacDonald faced as a woman in politics.

“The double standard was so evident,” said Jane. “MacDonald had a lot of support going into the leadership, but when it came to people going into the polling booths and putting an X beside a woman’s name – they just couldn’t do it.”

After Flora MacDonald, Jane never joined a campaign again – but her interest in federal politics was set in stone.  Following graduation, she worked on Parliament Hill with The Ottawa Citizen, The National Post and The Globe and Mail, and covered every Prime Minister from Brian Mulroney to Stephen Harper. Here, she witnessed historical Canadian moments from her front-row seat.  Looking back, Jane holds the politicians she covered in high regard, and challenges the common trope of the ‘power-hungry-public-servant.’

“I would say that 99.9% of the elected politicians I met along the way are there for public service,” stated Jane. “They were there because they wanted to do something for the community, and for the country.  I do think that sometimes politicians get a bad rap.”

Before leaving journalism in 2016, Jane’s career veered back to the roots she planted in the Flora MacDonald campaign, as her final assignment at The Globe and Mail was covering Queen’s Park as a columnist, writing the “Women In Politics” column.

“We have seen more and more women get elected, but I have to tell you, there is still a double standard with women in politics, elected officials, and women in business. They just are not seen in those roles as much,” said Jane. “I was intrigued by their toughness, their wisdom, experiences and what really drove them to get into politics.”

Now, some 40-years removed from obtaining her Carleton degree, Jane is proud to serve on the university’s Board of Governors. To each meeting, Jane not only brings a suitcase full of Carleton pride, but an abundance of wisdom from her successful career.

“I think it is all about communications,” stated Jane. “I think there are so many people who are reluctant to speak to the media – they are fearful, and I am hopeful that changes. Journalists are there to inform their audience, educate and tell a good story. It’s not about humiliating people or ‘gotcha journalism.’ It is about storytelling, and as a board member, that is where I can help.”

Jane was elected to the Board of Governors for a three-year term in 2019, and currently serves on the Advancement and University Relations Committee, and as a Board representative on Senate.