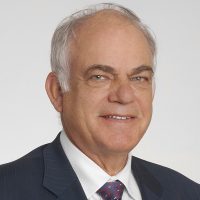 As the chief commercial counsel of the Canadian Government he led the legal team negotiating inter alia, the bail outs of Chrysler and Massey Ferguson, the establishment of a Bell Helicopter assembly plant for all its civilian copters in Canada, the privatisation of Canadiar and DeHavilland.

Subsequently he became the chief counsel to the Canada US free trade negotiations. In this position he was responsible for negotiating the dispute settlement provisions, drafting and implementing the agreement. He was also responsible for overseeing the drafting and implementing of all legislation, regulations and orders required to give effect to the provisions of NAFTA in Canada.

He was the Commissioner ( CEO) of the Competition Bureau for seven years. During his tenure the Bureau examined the merger of four of Canada’s leading banks (ultimately blocking them) collected the largest fine in Canadian criminal history for price collusion. He also reviewed and approved the merger between Air Canada and Canadian Airlines ensuring that the merger would not lead to a monopoly in the skies.

In addition to ensuring a competitive marketplace for Canadian businesses and consumers, he led the drive to create of the International Competition Network ( an umbrella organization encompassing all the competition agencies of the world) in order to harmonize competition regimes worldwide and served as the Founding Chairman.

As a Justice of the Federal Court from 2003 to 2007, he heard cases involving immigration and refugee law, intellectual property and administrative law. In particular, von Finckenstein held that uploading music tracks over the Internet is not in itself a violation of Canadian copyright law.

In 2007, he was appointed Chairman of the Canadian Radio-television and Telecommunications Commission (CRTC) for a five-year term. He was instrumental in removing unnecessary regulations, allowing the industry to react more quickly to market changes and consumer preferences in an era of rapid technological change. Over ninety percent of telephone market was foreborne from regulation and exposed to competition.

During his tenure the industry went through an unprecedented degree of consolidation. To meet these challenges he established frameworks for diversity of voices, vertical integration and net neutrality.

Hon. von Finckenstein is a Board representative on Senate and was re-elected to the Board of Governors for a three-year term commencing July 1, 2021 and ending June 30, 2024.

Hon. von Finckenstein has also been interviewed for a governor spotlight – see what he had to say.