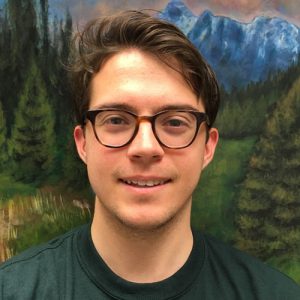 Jensen is excited to finally be returning to Carleton’s School of Journalism, having left the BA program in 2013 for the University of Victoria.

Throughout his undergraduate studies, Jensen worked as the media contact for Canadian Parents for French BC & Yukon, managing the WhereAreTheyNow.ca project with the organisation, while focusing his academic research in French Canadian literature, concentrating on the use of irony and humour in La tribu (François Barcelo) and Les têtes à Papineau (Jacques Godbout), two separatist-authored novels published shortly after the 1980 Quebec referendum.

Being steeped in critical analyses of humour, irony and satire throughout his degree has encouraged Jensen to consider the serious roles that satirical journalism (The Onion, The Beaverton) can play in understanding current events. This may be why Jensen finds wit to be an effective messenger, and consequently, why his favourite writer/journalist is fictional character Ford Prefect, travel writer for the Hitchhiker’s Guide to the Galaxy, (Douglas Adams’ Hitchhiker’s Guide to the Galaxy book series).