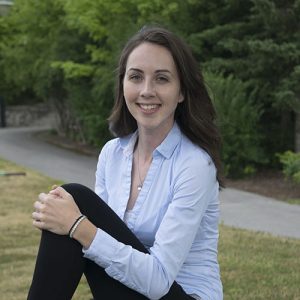 Megan is a multi-platform journalist with a background in television, magazine, digital, radio, and print journalism. During her time at Fanshawe College Megan won the Radio Television and Digital News Foundation 660 News Diversity scholarship for her audio documentary about the London Blizzards sledge hockey team. She also interned at CNN’s Washington D.C. bureau on the live show The Situation Room with Wolf Blitzer. Following her graduation from Fanshawe College’s Broadcast Journalism program she started working in radio as a news anchor and reporter for 104.7 Heart FM in Woodstock, Ontario.

In February 2015 Megan was chosen for the International University Sport Federation’s Young Reporters Programme to cover the 28th Universiade in Gwangju, Korea. During her final year at Huron University College at Western University Megan worked as a news anchor and reporter for the London, Ontario radio station CFPL AM (AM980). In July 2016 Megan returned to Ontario OUT of DOORS magazine in Peterborough, Ontario and worked as an editorial and web assistant.