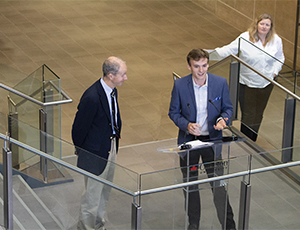 Gabe Senecal, a student in the Master of Public Policy and Administration (MPPA) program, was awarded the 2019 Ian MacDonald Memorial Essay Prize which recognizes the best single-authored student essay submitted as part of term-work for MPPA courses. Gabe’s paper, “The Structure of Ottawa City Council Votes from 2014-2018,” analyzed the voting patterns of councillors to evaluate voting blocs on council. Despite being one municipality for nearly two decades, the constituent municipal governments amalgamated into Ottawa are noticeable in councillors’ votes.

Since Ottawa does not have political parties at the municipal level, individual city councillors do not face pressure from a party whip or caucus colleagues and can vote as they please. Thus, the voting record of city council reveals patterns across the municipal political landscape. By analyzing the frequency different councillors vote the same way as each other we can compare the apparent voting coalitions on council, whether or not they are thought of as formal coalitions by councillors. Twenty years ago twelve local governments amalgamated into what makes up Ottawa today, joining suburban, rural, and urban communities under a single city council and mayor. Those regional divides are noticeable in analyzing the 2014 to 2018 term of City Council; rural councillors vote alike and urban councillors vote alike, with the two groups in occasional opposition. Political affiliation outside council also predicts the voting patterns.

This divide reared its head in July 2019 when Ottawa City Council voted to permit a controversial renovation to the historic Chateau Laurier Hotel. In that vote councilors representing wards that are part of the former City of Ottawa nearly universally opposed the addition and were outvoted by a larger contingent comprised almost exclusively of councillors from wards outside the prior-to-amalgamation boundaries of the City of Ottawa.