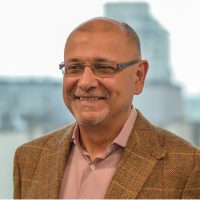 Saäd Rafi is a Partner and the National Public Sector Leader at Deloitte LLP, a global leader in serving the public sector.

He was most recently the CEO of the Ontario Retirement Pension Plan Administration Corporation (ORPPAC).  He joined the organization in January 2016.  Rafi was responsible for implementation the Ontario Pension Plan; and, the ORPPAC has been credited with helping to galvanize the provinces and federal government in achieving a national CPP Enhancement.

Prior to this role Rafi was the Deputy Minister of Health and Long Term Care, from 2010 to 2014, responsible for a $48 Billion budget.  During his tenure the Ministry undertook the most ambitious and significant transformation of the health system in a generation.

Rafi has held the following Deputy Minister positions during his 24 year OPS career: Community Safety (formerly Public Safety and Policing Services), Transportation and Energy and Infrastructure.  He was first appointed to the role of Deputy Minister in February 2003.  As Deputy Minister of Transportation Mr. Rafi led a concession transaction for the driver examination business.  He oversaw a 288 location franchise network, which delivered $750 Million of non tax revenue annually.

From 2005 to 2008, Rafi was a partner at Deloitte and Touche, LLP where he started and successfully built a national Infrastructure Advisory and Project Finance practice.

He has also held senior management positions in the Ministries of Economic Development and Trade, Cabinet Office, Transportation, and the Ontario SuperBuild Corporation, an Agency of the Ministry of Finance.  In that role, he undertook privatization of government assets (concessions, strategic partner searches and capital market transactions) and PPP transactions.