Five years ago I gave up flying. I had discovered that air travel was by far the biggest part of my personal carbon footprint – four times as big as heating my house with gas (which we’ve now stopped doing) and ten times as big as the small amount of driving I do. To make a meaningful reduction in my personal contribution to climate change I had to give up flying.

So, how to be an academic without flying? In the last five years I’ve given several talks by video link, and I’ve travelled by train to meetings in places that now seem far away, like Chicago and Charlottesville Virginia. But how to maintain and expand my research collaborations in Europe? At first I thought of going by cruise ship but a ‘helpful’ colleague pointed out that the per-person CO2 emissions of cruise ships are about the same as that of flying.

So, I looked into passenger travel by cargo ship and now here I am in Germany, all set to start a 3-month fellowship at the German Centre for Integrative Biodiversity Research, iDiv.

To get here we took the Atlantic Sea container ship from Halifax to Hamburg, crossing the North Atlantic in mid-January. 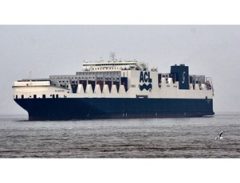 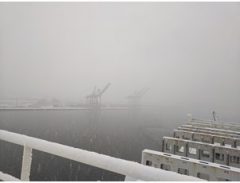 Departing Halifax port in a snowstorm

The only thing I was really worried about before leaving was seasickness. And we did experience extreme winds and waves, up to 11-m swells and 150 kph winds. According to our captain, this was exceptional even for the North Atlantic in winter. Here’s what a 4-m swell looks like taken through the same pair of windows in the mess hall, a few seconds apart. 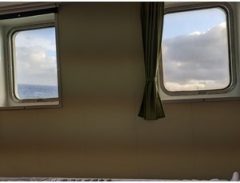 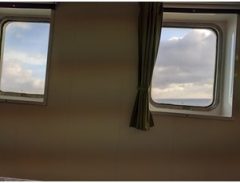 You can’t imagine what 11-m swells are like. You have to experience it. In a 6-m swell, furniture slides from one side of the room to the other, including the chair you’re sitting in. Things fall off tables and break. Everything that can be tied down is tied down, which was the case for most of our trip.

Amazingly I never really got seasick. I have to admit that I lost some sleep the first couple of nights. It’s a weird sensation to be lying on your side and then realize you’re facing straight down. The motion is slow, so you have lots of time to wonder whether the boat will ever come back upright again. Also, every so often a big wave crashed into the ship, giving it a disturbing jolt. The first time that happened I thought we’d hit an ice berg. As the captain said, “this may be a 300-m ship but to Mother Nature it’s just a toy.”

But I got used to it and overall I have to say the trip was really very interesting, enjoyable, and relaxing. After all, what’s not to like about 12 quiet days with no internet or phone? I even got a good bit of work done on a grant proposal and a couple of papers. 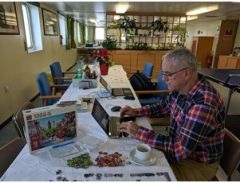 Working in the mess hall – the other computer is mine

For entertainment there were darts and ping pong – way more fun when the room is in constant motion :) There was also a very elaborate basketball video game that the crew were pretty serious about, and a separate room for watching videos. 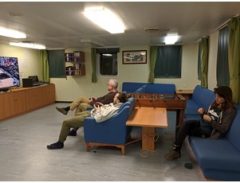 And, just being on the bridge was entertaining in a nerdy kind of way. For example, our ship let off three weather balloons per day and we could watch the real-time weather data come in as the balloon floated up and away. Our ship was also responsible for a plankton tow from Baltimore to Halifax, which it dropped off in Liverpool, contributing to a research program that’s been ongoing for over 50 years. 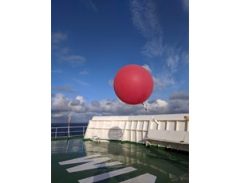 It was also really fascinating to watch the containers being loaded and unloaded in port. 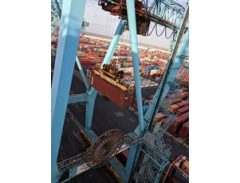 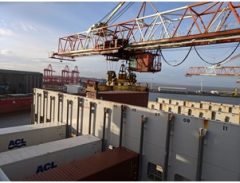 There were 22 crew and 4 passengers on board. The captain was Polish, the engineers were Russian, and the mates and the other crew were from the Philippines. Food was approximately eastern European – meat, cabbage, beets, potatoes. Also, two salads per day so no chance of getting scurvy. I did note a distinct dearth of chocolate, which I plan to fix on our way back. 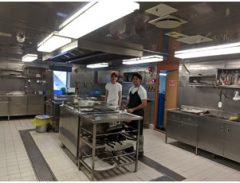 By law the maximum number of passengers on a cargo ship is 12. Apparently in the summer the seas are calm and they are always booked to capacity.

We had the run of the top two floors of the ship, which included our cabin, the  mess hall, the video room which also had laundry facilities, and the bridge. 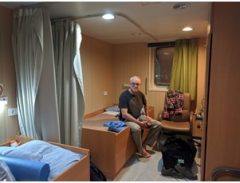 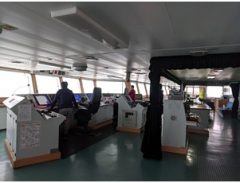 We were allowed on the bridge any time, except when we were in port. The captain and mates were very open to answering my copious questions – even during the rather tense morning of our second day out, when the engine stopped running altogether and we drifted aimlessly in the middle of the Atlantic Ocean for a couple of hours while the engineers fixed it. 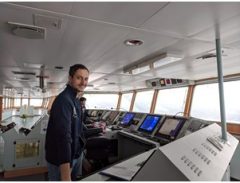 We were also allowed outside on the decks anytime, no matter how dangerous the conditions. In fact, this was a cargo ship and the crew were there for the security of the cargo and equipment only. Our security was entirely up to us. There were no crew ensuring we didn’t do something stupid, and stupid things would have been remarkably easy to do. During my first (and only) attempt to go on the top deck in high winds it was pretty clear that the railings would not have kept me from sliding off, no-one would have noticed if I did, and I wouldn’t have survived anyway.

Here are some answers to things people have asked me about:

Our room had a window, two end-to-end bunk-bed-size beds, one desk, two chairs, two lockable cupboards, and a bathroom with shower. Furnishings were utilitarian, dorm-room style.

No, you can’t work for your passage. Working on a cargo ship requires specific training.

No, it’s not cheap. For Halifax-Hamburg return it was just under $3,000 CDN per person. On the other hand, consider that this includes not just transportation but also food and lodging for ~24 days. And since I haven’t flown for the past 5 years I figure that one return crossing by cargo ship is replacing about eight return flights that I otherwise would have made, so in a sense it’s a deal.

I booked passage through an agent in New Zealand who specializes in passenger travel on cargo ships. He was great. There are other agents, but none in Canada that I could find.

You have to be pretty flexible about timing. At one point our departure was delayed by two days but then it reverted back to the original schedule and, in the end, we left half a day early. Nonetheless, we were a day late arriving in Hamburg because the winds were too high to get out of the port at Liverpool once we were in it, a tricky manoeuvre in itself. 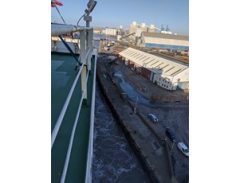 Entering the lock at the entrance to Liverpool port

And, when the sky is clear and the seas are calm enough to go onto the top deck at night, the stars are amazing.

Any other questions? Email me at lenore.fahrig@carleton.ca. See you in June after a smooth return crossing. 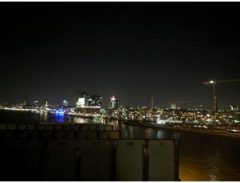