Water bodies have little concern for national borders – there are 263 transboundary lake and river basins around the world, covering nearly half of the Earth’s surface. A total of 148 nations include territory within one or more international basins. With the human population and its demand for freshwater growing, and the global supply facing threats from pollution and climatic change, the need to collaborate in our management of water resources is more urgent than ever. Many experts express the concern that the wars of the future will be centered on access to water resources; others see in this inherently global crisis an unprecedented opportunity for international cooperation. As it stands, the body of international law which governs the management of international waterways for non-navigational uses is notoriously weak.

For the second installment of the Global Water Institute’s “Water Conversations” series, we heard from Adjunct Professor Tag Elkhazin of the Carleton Institute of African Studies, who gave us an overview of international law and cooperative agreements on cross-boundary rivers. 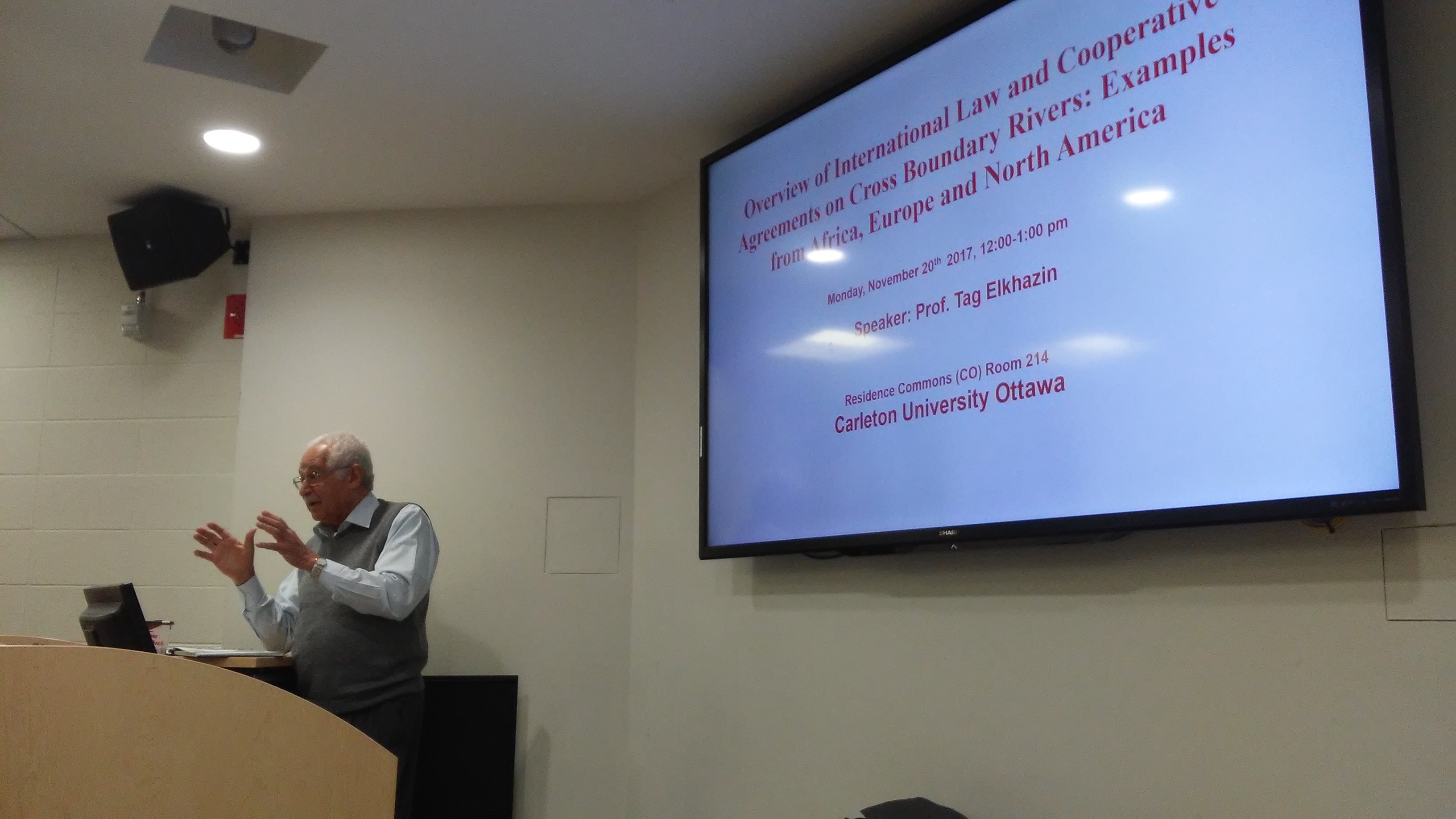 The Helsinki Rules were adopted by the International Law Association in 1966. While not legally-binding, this set of international guidelines was the first of its kind. Applicable to all drainage basins that cross national boundaries, except where other agreement between bordering nations exists, the Helsinki Rules asserted the rights of all bordering nations to an equitable share in the water resources, with reasonable consideration of such factors as past customary usages of the resource and balancing variant needs and demands of the bordering nations. It also mandated protection of the resource by bordering nations with respect to water pollution, and set forth recommendations for resolving disputes over usage of such watercourses. Although there were shortcomings – overlooking aquifers not connected to a river, for instance – the Helsinki rules were an important first step towards the eventual development of the United Nation’s Convention on the Law of Non-Navigational Uses of International Watercourses. And in 2004, they were superseded, and improved upon, by the Berlin Rules on Water Resources.

Nevertheless, the Helsinki rules and other similar documents to follow, while admirable in content, are devoid of enforcement mechanisms. As such, they are a relatively weak means of ensuring joint and equitable governance of transboundary water resources. And lack of enforcement mechanisms is not the only shortcoming to this type of agreement: they can also take a very long time to develop, agree upon, and ratify. It took 24 years for the International Law Commission to prepare the viable international guidelines requested by the U.N. in 1970 (comparable to the Helsinki rules, but expanded to include both surface and groundwater). It then took an additional 17 years from the time of its adoption for the U.N. Convention to come into force (1996-2014). And with the treaty having been ratified by just 36 states, the majority of countries (including several key ones) still remain outside its scope. Nations must, after all, voluntarily enter into this type of agreement.

The U.N. convention sought to impose upon UN member states an obligation to consider the impact of their actions on other states with an interest in a water resource and to equitably share the resource, while remaining mindful of variable factors such as population size, availability of alternative resources, and historically established uses of a watercourse. The document included such provisions as:

The U.N. convention was not without its controversies. Critics pointed out the difficulties in reconciling presently established equitable use with historically established usage rights. Some of the language was deemed to be problematic, particularly that which stemmed from the U.N.’s desire to emphasize the obligation to “do no harm” (adapted from the ILC’s original language, which more heavily emphasized equitable use, and balance of the various needs of States.) There are simply situations where the legitimate development of the resource by one nation cannot take place without causing harm to another, and the ambiguity of the language complicates the goal of reaching a mutually acceptable solution for both states.

But the biggest problem with this type of international agreement or convention remains the lack of enforcement power, and the same issue would continue to arise time and again with other similar documents. While the International Court of Justice arbitrates conflicts between nations who cannot reach a mutually acceptable decision, the U.N. Security Council rarely uses the power granted to it under Chapter VII of the United Nations Charter (which covers use of force or economic sanctions with respect to threats to the peace, breaches of the peace and acts of aggression) to support the Court’s decisions.
In that sense, this type of agreement is more symbolic of a change in the nature of international relations and the way shared resources are viewed and valued than it is a practical solution to an urgent problem. There are, however, multiple examples of international agreements governing the use of shared water bodies that have yielded rapid and lasting results, and Prof. Elkhazin outlined a few in his presentation. 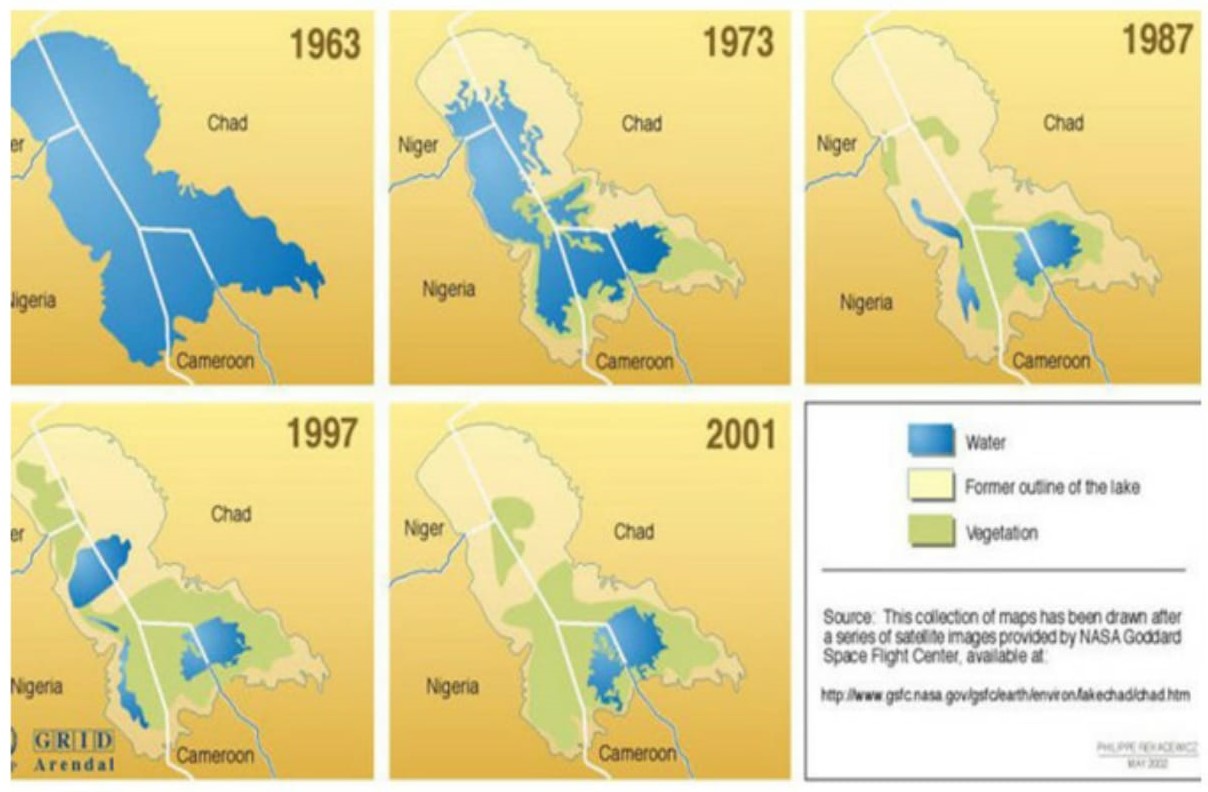 Africa: The Post-Colonial Convention and Statute Relating to the Development of the Chad Basin was successfully negotiated between 8 African States in response to a significant decrease in the basin’s volume over a period of 40 years (to a mere 5.8% of its former area). No U.N. intervention was required. A similarly successful agreement was struck for the Gambia River.

Europe: The International Commission for the Protection of the Elbe River was signed in 1990, with the principle objectives of ensuring the use of water for drinking and agricultural use, while maintaining the most natural ecosystem possible (one that can provide for healthy species populations) and decreasing the burden of the Elbe River Basin on the North Sea. Signatories agreed to collaborate to improve the status of the Elbe River and its tributaries (in terms of physical, biological and chemical conditions) and improve the ecological value of the associated riparian zone. A similar International Commission was formed for the protection of the Danube River.

North America: Our own success story is that of the International Joint Commission (IJC) for the Protection of the Waters of the Great Lakes, struck between the U.S. and Canada. The IJC has successfully addressed many matters important to the interests and well-being of our two nations, including atmospheric deposition of pollutants from industrial activities, microplastics in the Great Lakes, flood management, eliminating releases of raw sewage, addressing eutrophication, and more. The two countries continue to collaboratively monitor and share information with each other on air quality, water level and quality, ecological health, climatic changes, and other aspects of the North American hydrological landscape. 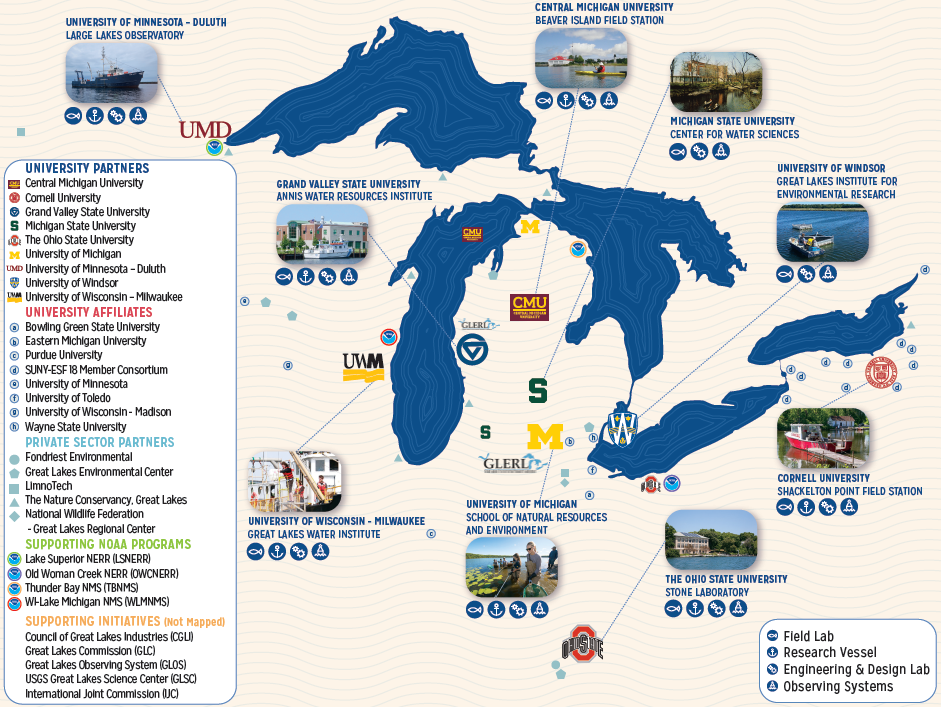 The Great Lakes experimental area, in which the IJC is just one of many participating research organizations.

Many interesting questions and comments were raised during the discussion period after Prof. Elkhazin’s presentation – a few of which are transcribed below:

Tag Elkhazin has done consulting, research and construction work in the area of water for UNICEF, Save the Children Fund UK, DFATD Canada, the International Rescue Committee, Canada Africa Fund, The World Bank MDTF-N, The World Bank-South Sudan, British ODA (Now DFID), Government of Sudan in dams’ Study Design and Geophysical investigation. He worked extensively for and with the Government of South Sudan and (Sudan-South before 2005) in rainwater harvesting structures. He has extensive expertise in Nile Waters, its hydrology, hydraulics, policies and politics as well as legal frameworks of cross boundary rivers (27 in Africa and 11 on the Nile Valley). He is the a political analyst and author of several articles and assessments on Conflict in South Sudan, IGAD/CPA and South Sudan, Water/Nile Waters, Women, Civil Society, Peace and Conflict Resolution, Darfur Political Process and generally relating to the Horn of Africa. He is a frequent commentator in Radio Canada International.

Disclaimer: The views and opinions expressed in this article are those of the speaker and other law experts, and do not necessarily reflect the official policy or position of the Global Water Institute.