Water Conversations with Paul Villeneuve: Does living near water and greenness impact the mortality of Canadian urbanites? Findings from the Canadian Census Cohort

Half of the world population lives in cities, and that proportion is expected to increase rapidly over the coming years. Urban living is associated with higher disease rates, and, conversely, living near green spaces has been shown to yield positive health benefits. For the seventh installment of the Global Water Institute’s “Water Conversations” talk series, we heard from Professor Paul Villeneuve from the Carleton Department of Health Sciences on his work quantifying the health benefits of green spaces in urban settings using Canadian census data, and his participation in one of the first major studies assessing the mortality benefits of blue spaces (bodies of water).

Dr. Villeneuve is both an epidemiologist and a biostatistician. He is an Affiliate Scientist at the Ontario Occupational Cancer Research Centre in Toronto, and an Associate Editor for Health Promotion and Chronic Disease Prevention in Canada. He is also a member of the Advisory Committee for the Canadian Health Adaptations, Innovations, and Mobilization (CHAIM) Centre at Carleton. His research focuses on environmental factors related to disease, such as air pollution and occupational exposure. His colleague Dr. Dan Crouse, the lead investigator in the study whose results Paul presented to us today, is an environmental epidemiologist and health geographer based at New Brunswick University.

The waterside city of Vancouver, Canada.

Previous studies have identified a number of health benefits associated with proximity to greenness, including:

The presence of green spaces has also been found to interact with other environmental exposures, including:

There are some difficulties associated with the existing methods of assessment of the benefits of green spaces. Depending on the health outcome a researcher is interested in, many different pathways can be involved, and one must try to delineate how these factors interact with each other, requiring the development of new metrics of measurement. For instance, income is a powerful determinant of mortality, so one might compare levels of greenness alongside income in order to isolate the effect of green space. (Interestingly, in one previous study done in the UK, it was determined that the greener the space, the less pronounced the difference in mortality between income groups, leading them to conclude that adding green space to urban settings could help reduce social disparities in health outcomes. A Canadian study found that the inverse association between greenness and mortality was strongest in affluent neighbourhoods, but this could be a reflection of differences in the quality of green spaces in more and less affluent neighbourhoods, and the opportunity different income groups have to use them.) Studies of the health benefits of greenness need to account for air pollution as they are correlated with each other, and air pollution is associated with a number of adverse health outcomes. Several studies of greenness have used self-reporting, asking participants to record the level of greenness that surrounds them. The shortcoming of this method is that people who are already healthier likely have more opportunity to survey their neighbourhoods – introducing a bias to the reported results. This is why it can be useful to use census and income tax data: income information is more accurate compared to self-reporting, and you can combine place of residence with remote sensing data to get an objective rendering of greenness levels. Drs. Crouse and Villeneuve used postal codes to divide the urban landscape into quadrants and assign them a Normal Difference Vegetation Index (NDVI) value. It’s also best to use longitudinal data to account for the possibility that participants may have recently moved into the area – perhaps even for treatment of an existing medical condition – or previously lived under different environmental conditions. 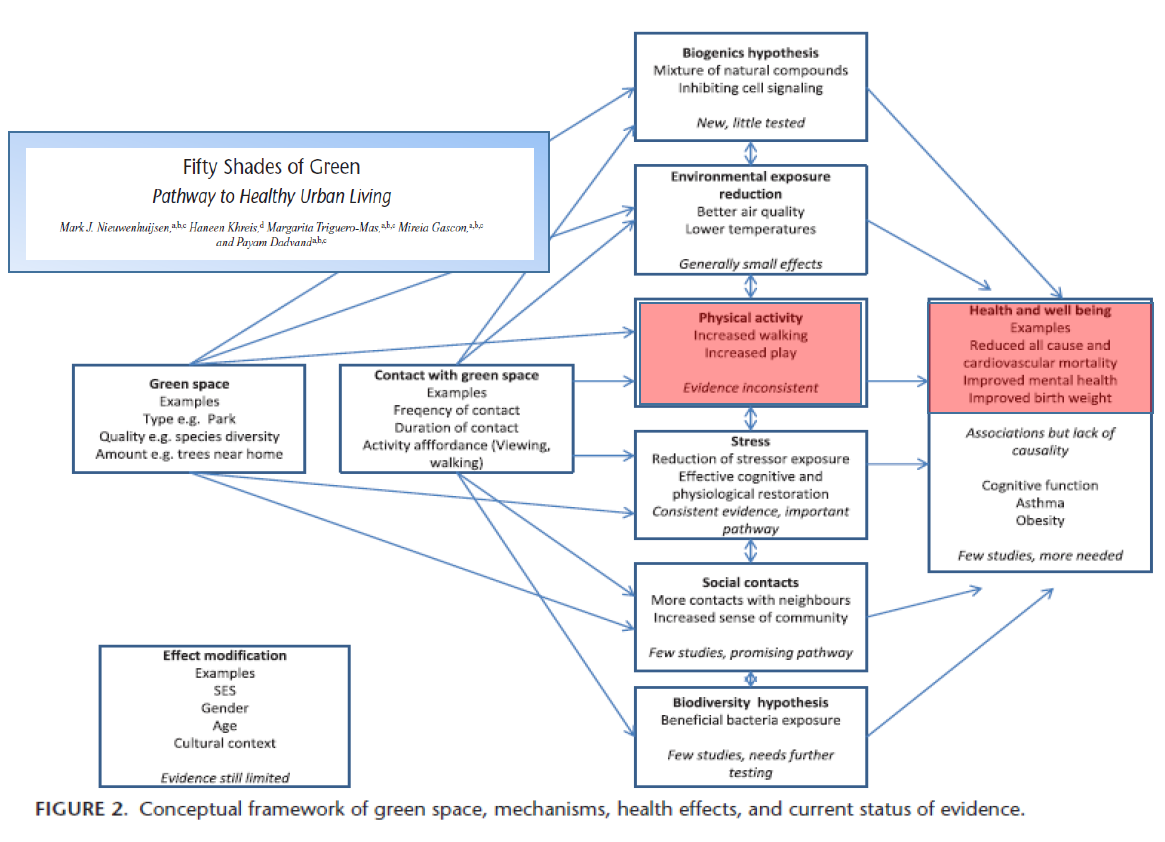 This framework from an existing study illustrates the complexity of isolating factors and effects and obtaining accurate results.

Findings on greenness:
Inverse associations were noted between greenness and mortality – for every non-accidental cause of death examined. The inverse association was strongest for non-malignant respiratory disease, and ischemic heart disease, and for respondents between the ages of 35 and 74. The association changed little after adjustment for air pollution – which suggests that while both air quality and greenness are important metrics, they may be relatively independent of each other in their effects.

But what about blue space?
There has been far less work done on the effect of living near blue spaces. While we know that people like to look at water, most of the existing information pertains to mental health benefits (e.g. happiness, reduced stress, restorative properties.) Less is known about the effects on physical health – save for one study that showed a reduction in heat-related mortality near bodies of water. Systematic review of existing studies on the subject have found inconsistent findings, or relied on self-reporting measures of access to blue space which has important limitations.
The study which Dr. Villeneuve participated in was one of the first large studies to find mortality benefits with blue spaces. Epidemiologists are very fortunate to have access to such sources of information as the Canadian Census Health and Environment Cohort for this type of study, as it provides consistent data quality over time for a large number of study participants. Also, unlike air pollution and potentially green spaces, which change over time, the presence of blue space remains relatively consistent. The study used geospatial data developed by Statistics Canada on natural hydrographical features, including lakes, large reservoirs, rivers, and coastal waters, to determine exposure. 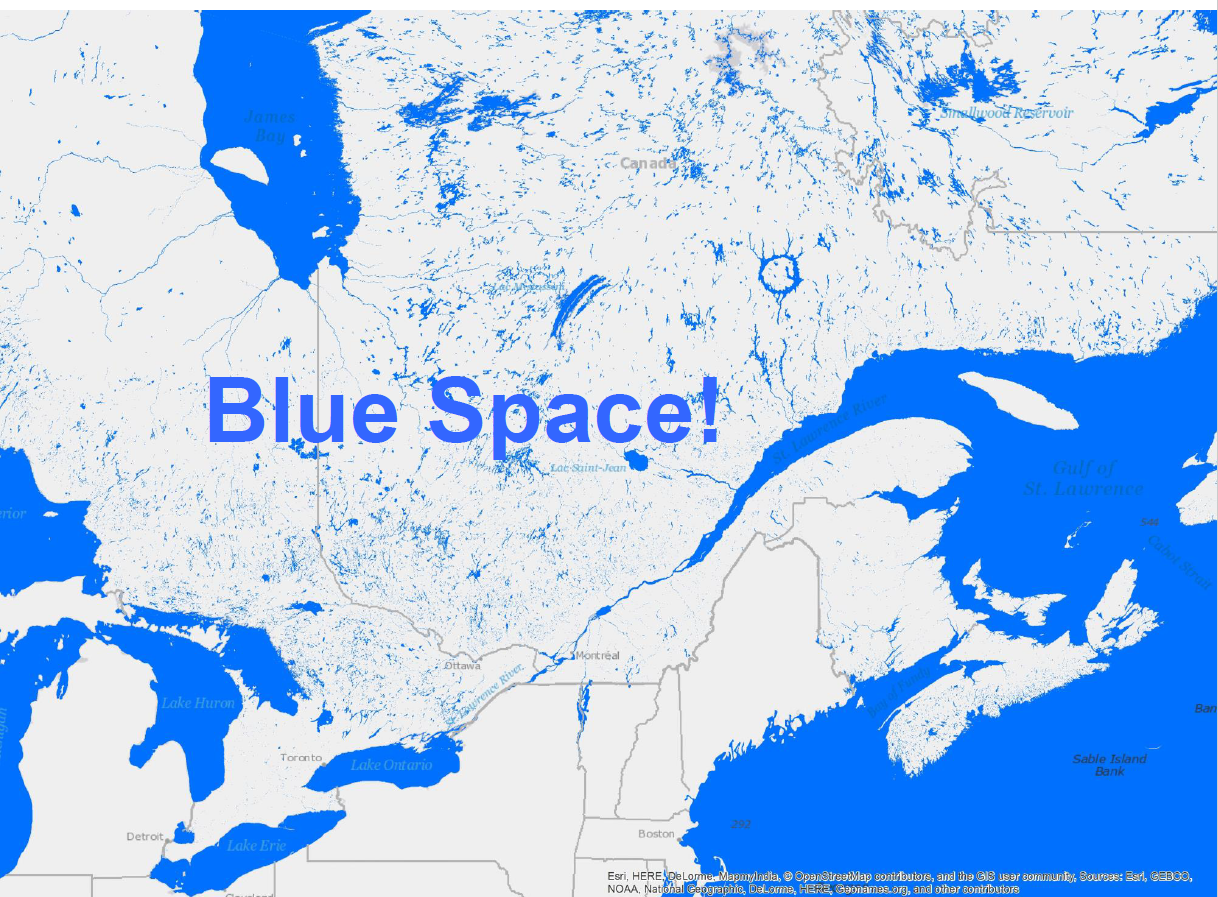 Canadians are fortunate to benefit from the presence of numerous blue spaces!

The study found that residential exposures to blue spaces may have much stronger health benefits than previously assumed – even more significant than those for greenness. Also, everyday residential exposure to blue space in urban areas may have important health benefits that are separate and distinct from those accrued with purposeful visits to natural areas. However, the methodology had its strengths and weaknesses like any other. Dr. Villeneuve ended his talk with a discussion of how future similar studies could be improved:

Epidemiological studies are exploratory in nature – they can determine a correlation, but not necessarily the cause (although the existing literature suggests that access to blue spaces reduce stress, which is related to health.) Follow-up studies are needed to determine why a correlation exists, and also to further the work of disentangling environmental exposures and understanding the interrelations between them. The role of self-selection bias needs to be better understood, and more evidence-based findings are needed to inform urban planning policy. But it seems we can now definitively say that access to natural spaces, blue or green, is good for the health of Canadian urbanites.

Join us in May for Nadia Springle from Carleton’s School of Public Policy and Administration, who will be talking about water governance.