For the fifth installment of the Global Water Institute’s talk series, Water Conversations, we had the pleasure of hearing 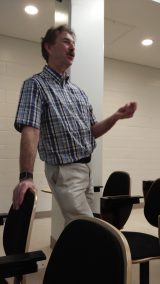 from Dr. Tim Patterson, paleolimnologist and professor of Earth Sciences at Carleton University. Dr. Patterson has been working in the Northwest Territories for more than a decade. Today, he shared with us his recent work establishing the chronology of the death of a once healthy lake.

Yellowknife is the largest city in the Canadian North. It began as a mining settlement – the town site was established in 1936 and the first gold mine opened in 1938. Many other gold mines have since been established in the surrounding region. Right in the center of Yellowknife is Frame Lake, the subject of Dr. Patterson’s study. As the city grew, the lake was gradually surrounded on all sides by urban development, and in 1964 a road and sluice gates were built across one water exit, limiting circulation. As development around the lake intensified, the sluice gates were kept closed more often. 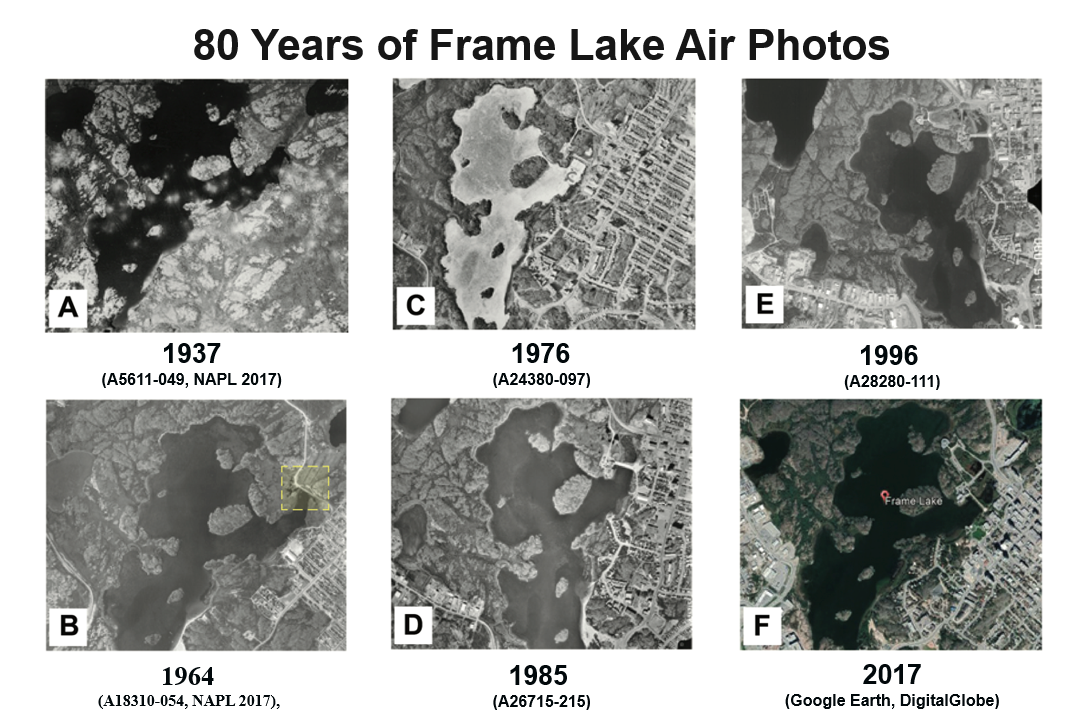 Frame Lake and its beach were once recreationally important to the residents of Yellowknife, a popular site for swimming and fishing. By the late 1970s, however, the lake’s condition had changed drastically, exhibiting mass fish death, anoxic conditions in winter, and a population explosion of leeches and macrophytes (aquatic plants). The purpose of Dr. Patterson and his team’s project was to establish the chronology of change, determine the conditions which allowed Frame Lake to support fish in the past, and come up with strategies for its remediation.

Who killed Frame Lake? The investigation.

The nature of gold ore is such that special processing is required, which produces a by-product of highly toxic particulate arsenic trioxide. Initially this toxin was simply released through smokestacks to be spread onto the land downwind. This practice unfortunately continued even past the point when the consequences became better-known (in the late 40s). Today, the arsenic trioxide is kept in cryostorage beneath the mines, but a legacy of unfettered arsenic contamination remains in the region. Dr. Patterson and his team sampled over 100 lakes in the Yellowknife area, ranging from just beyond the mines to kilometers beyond, and found that arsenic was still present in lake sediments long after the use of smokestacks for dispersal had ceased.

The process which Dr. Patterson’s team used to sample lake sediments is known as “freeze coring”. A stick of dry ice with metal plating is lowered into lake-bottom sediment and the sediment very quickly sticks to it, helping prevent the mixing of samples (a problem frequently experienced with the use of conventional “gravity corers”) and provide an undisturbed limnological record.

There are, however, two difficulties posed by the use of arsenic contamination as a chronological determinant:

The solution to the problem of arsenic mobility is to examine the presence of shelled amoeba instead. Their shells are composed of grains from their environment, making them very sensitive bioindicators. They do not travel within the sediment column, and as such provide a picture of what their environment was like at the time of deposition (unlike arsenic, which can become mobile.) There are also many different species, with different morphologies and tolerances. This allowed Dr. Patterson and his team to look at many different lakes, determine the relationship between arsenic levels and species groupings, and relate the presence of different groupings to the information collected from the core sample.

Arsenic contamination is the obvious culprit given the multitude of nearby mines – and it certainly was an important factor. There was more than one factor responsible for the death of Frame Lake, however. The lake was used as a dump by a number of different actors – “like the wild west right in the middle of town,” in Dr. Patterson’s words – during the industrial and urban development of the area.

Several solutions have been suggested to help remediate Frame Lake, including:

However, each solution has its problems – lack of local familiarity with the methods; concern that the falling water level would expose unsightly mud patches around the lake (a popular walking destination) and leave the contaminated soil exposed to the elements; insufficient information about exactly how much waste needs to be removed and where to store it; untenable costs to the municipality; and insufficient understanding of the exact nature of proposed proprietary technologies. As such, Dr. Patterson and team are still searching for a mutually agreeable solution.

Visit his homepage for more information on his research activities.