Plastics are everywhere. We build with them, wear them, eat with them. We use them in most things that make our everyday lives possible. Plastics are ubiquitous because they’re durable and cheap to produce. However, like every material, they have a life cycle.
As we learn more about what happens to plastics as they degrade, the world is beginning to learn how the tiny plastic fragments and fibres known as microplastics are impacting ecosystems and human health. For example, a 2019 WWF analysis claims that humans are consuming about five grams of plastic each week, the equivalent of a credit card. The largest source of this plastic is drinking water.

Particuleye Technologies wants to help researchers better understand the problems. “Microplastics are largely unmonitored, so we don’t fully understand the extent and sources of pollution in freshwater resources,” says Zach Desrochers, CEO. “Researchers need faster and more accurate ways to quantify and characterize microplastics in water samples so they can inform our policies and offer next steps.”

Coming together to solve a problem

Formed in early 2020, Particuleye is a team of entrepreneurs who are passionate about solving microplastics pollution. Quinn Desrochers, Michael Beck, Zach Gousseau, Waseem Jawad, and Ryan Tran found each other through the Lake Winnipeg edition of the 2020 AquaHacking Challenge, an annual competition that aims to engage and support young Canadian entrepreneurs as they launch new technologies and solutions for freshwater challenges.
The beauty of AquaHacking, Desrochers says, is that it matches people with diverse backgrounds to tackle a shared interest. “I’m a civil engineer, Michael is a mathematician and computer scientist, Zach and Ryan are into data and analytics, and Waseem brings the business expertise,” says Quinn Desrochers, CEO. “We’re all interested in environmental issues, but most of us didn’t know each other before the competition.”

As the team considered each other’s skills and researched the competition’s problem statements, they learned that it can take days, even weeks, for researchers to collect and analyze water samples for microplastics. They decided to focus on a solution that drew upon their collective strengths.

Ryan Tran, the company’s chief content officer, was attracted to the technical aspect of the challenge. “Researchers still have to manually count the fragments and fibres in their samples,” he says. “For them, it would be a big help to automate the process, or at least to have a tool to act as a second eye.”

As a volunteer mentor for AquaHacking teams, University of Toronto researcher Dr. Chelsea Rochman provided the team with datasets from her lab. Tran, a computer engineer, used the datasets to develop a machine learning algorithm to identify different plastics in the samples.
Classifying microplastics can help researchers identify their source, says Michael Beck, a mathematician and computer scientist at the University of Winnipeg, as well as Particuleye’s chief technology officer. “In the future, this could be helpful as governments enforce regulations.” Beck brings expertise in imaging technologies and, in his full-time work, is conducting research in the field of digital agriculture.

The result of Particuleye’s work is a technology that uses computer vision and machine learning to make the counting and identification of microplastics fast, easy, accurate, and cost-efficient.

From concept to prototype

Over the course of two years and a global pandemic, the Particuleye team has taken its vision from concept to prototype. After eight months of hard work, they won the AquaHacking Challenge and have since leveraged the $20,000 prize to attract other grants, including support for research from Mitacs eAccelerate program. Today, they’re working together with researchers from Carleton University’s Global Water Institute to validate their solution. The project is part of Environment and Climate Change Canada’s Zero Plastic Waste Funding Initiative.

Desrochers says working with Dr. Banu Örmeci and GWI is helping Particuleye validate their solution. “They’re the first ones to try the technology outside of our team,” Desrochers says. “They’re giving us invaluable feedback about how it’s working and what we need to improve.”
Once they validate the technology for use in lab environments, the team plans to make their solution available to governments. “We want to help inform regulators as they make decisions about how to manage microplastics,” says chief financial officer Waseem Jawad. “There’s a huge data gap, and we can help fill it.”

Particuleye also wants to test the technology in wastewater treatment facilities and, eventually, make the device available to the public for citizen science. “It should be that easy to use,” he says. “We’re motivated to give people the tools they need to inform next steps, determine solutions, and restore ecosystems.” 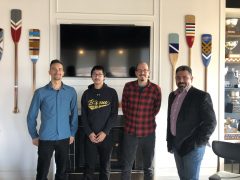