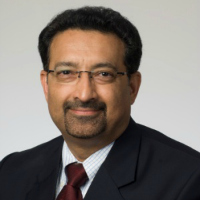 Dr. Pradeep Merchant is a well-known and respected individual in the Indo-Canadian community and in the City of Ottawa. Currently, he is the Site Chief of the Division of Neonatology at the Civic Campus and Assistant Professor in Dept. of Paediatrics at University of Ottawa.

He has played an active role in building strong professional and business organization in Ottawa. He has been an extremely successful Chair of the Indo-Canada Ottawa Business Chamber (ICOBC) for the years 2010-2012. Dr. Merchant has worked tirelessly with the private and political sectors to improve economical ties between India and Canada. He has volunteered and contributed actively too many think tank discussions at various provincial and federal level and round table meetings to enhance the understanding and relationship between the two great parliamentary democracies. He currently serves on the Advisory Board of India Canada Chamber of Commerce.

He has been instrumental in developing and a current Co-Chair of the “Canada-India Center for Excellence in Science, Technology, Trade and Policy” in Ottawa at the Carleton University.

He has been appointed to the Board of Governors for the Carleton University for term of three years starting 2013-2016.

He serves on the Board of the Mahatma Gandhi Peace Council of Ottawa. The council brought Mahatma Gandhi’s statue in the Nation’s Capital at the Carleton University. He serves on the Board of Queensway Carleton Hospital Foundation as an active community representative in helping health care institutions. Dr. Merchant has recently been confirmed for the Queen Elizabeth II Diamond Jubilee Medal for outstanding Canadians.