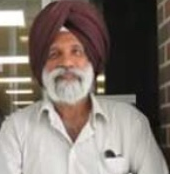 Dr. Singh is the Adjunct Research Professor for the Faculty of Art & Social Sciences, at the College of the Humanities at Carleton University. He is also the visiting Professor at the Centre on Guru Granth Sahib Studies, Guru Nanak Dev University in Punjab.

Dr. Singh has completed his B.Sc. (Hons.) Mathematics from Woolwich Polytechnic in 1969, followed by M. A. in History from Punjabi University in 1999 and later Ph.D. in History in 2001.

His commitments at community organizations include roles such as Secretary of Ottawa Sikh Society, Founder & President – Federation of Sikh Societies of Canada, President – Cornwall Education & Cultural Centre and President – Sikh Institute of Canada.

Some of the books published are : Ottawa Sikh Society [1968-1993], Condition of Sikhs in Canada [in Press] and Sikh Studies [under Preparation]

Dr. Singh was awarded the Queen’s Golden Jubilee Medal in 2002 for significant contribution to Canada, to the community and fellow Canadians.