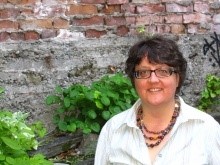 Dr. Jakobsh considers teaching a privilege and firmly believes, it is not a ‘one way street’.  Her teaching and research have intersected resulting in a  book on Sikhs published by the University of Hawaii Press.. The research and writing of the book is largely influenced by a course she teaches.  Dr. Jakobsh believes in a central mandate: to give students the opportunity and tools to challenge deeply held assumptions and biases, both on a personal and societal level.   She believes strongly in moving beyond the basic ‘facts’ to include what the educator David Perkins calls ‘troublesome knowledge’, knowledge that nudges both teachers and students into ‘seeing things in a new way’, allowing for movement away from ‘performance’ or ‘outcome’ learning to a more inward process of reflection and analysis.

Dr. Jakobsh completed her Joint Honours B.A., Social Development Studies/Religious Studies from University of Waterloo in 1990, followed by  Master of Theological Studies, Harvard Divinity School, Harvard University, USA in  1992 and later Ph.D.  in Asian Studies at the University of British Columbia in 2000.