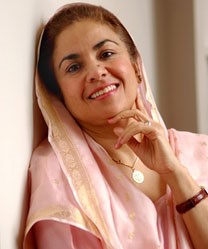 Dr. Nikky-Guninder Kaur Singh was born in India, and went to Stuart Hall, a girls’ preparatory school in the USA. She received her BA in Philosophy and Religion from Wellesley College in 1978, her MA from the University of Pennsylvania in 1982, and her PhD from Temple University in 1987.

Her areas of expertise are Sikhism, Eastern sexuality, Indian women’s issues, major religions of northern India, role of women in religious literature, literary analysis of scripture, and religious themes in Western literature. Her interests focus on poetics and feminist issues.

Dr. Singh has published extensively in the field of Sikhism. Few of the important publications are as follows:

Dr. Singh has lectured widely in North America, England, France, India, and Singapore, and her views have been aired on television and radio in America, Canada, Bangladesh, Australia, Ireland and India.