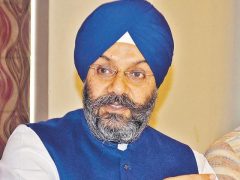 Mr. Manjit Singh GK is President of the prestigious organisation of Sikhs – the Delhi Sikh Gurdwara Management Committee (DSGMC), managing gurdwaras in India’s capital Delhi.  Mr. Singh is the second eldest of four sons and a daughter of Mr. Jathedar Santokh Singh, who earned tremendous respect for his selfless service towards the Sikh community and was assassinated in 1981.

Mr. Singh is also President of the Delhi unit of Shiromani Akali Dal-Badal and is carrying forward the legacy of his father as well as traditions of the Akali party. He seeks direction from Akali stalwart Punjab CM Parkash Singh Badal who is also a patron of Shiromani Akali Dal.  Apart from giving his selfless service to the Sikh community and DSGMC, Mr. Singh works hard to make his party President and Deputy CM of Punjab, Mr. Sukhbir Singh Badal stronger in his efforts to fight for Sikh rights. He keeps a modern outlook and has keen interest in environment conservation and education. Mr. Singh is continuously fighting for Sikh rights and is active since the days of terrorism in Punjab and the dark phase of anti-Sikh riots that broke out in the entire country in 1984. He always voiced strong opinions about the issues related to Sikhs and the Akali party.