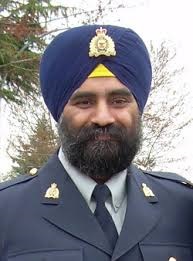 Officer in Charge, Operational Readiness and

Raised in Malaysia, Mr. Baltej Singh Dhillon and his family move to British Columbia in 1983 after which they settled in Surrey. He studied criminology, and though initially interested in practicing law, he volunteered with the RCMP and acted as an interpreter so that the RCMP could communicate with recent Asian immigrants.

In 1988, Mr. Dhillon decided to formally apply to join the RCMP. Though he met all the entrance requirements, he encountered one significant problem: the dress code forbad beards and wearing a turban in place of the uniform hat. In 1989, Mr. Dhillon appealed to the RCMP Commissioner, who recommended removing the ban on beards and turbans to the federal government. After months of debate, the Brian Mulroney government announced new changes to the RCMP dress code in March of 1990 — including the freedom  for observant Sikhs to wear beards and turbans. As a result, Mr. Dhillon joined the RCMP, trained in Regina and graduated to active duty in 1991.

Mr. Dhillon was also awarded the honorary degree of the Doctor of Lawa by Kwantlen Polytech University in May 2014.