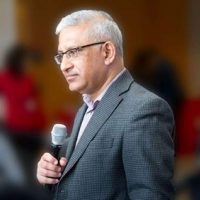 Professor Karim H. Karim was the Carleton Centre for the Study of Islam’s Director from 2013 to 2021. He worked with academic and community partners to organize series of lectures, conferences, discussions, and research. Dr. Karim previously served as Director of the Institute of Ismaili Studies (UK) and Carleton’s School of Journalism and Communication, where he teaches. He has also been a Visiting Scholar at Harvard University.

Professor Karim holds degrees from Columbia and McGill universities. His areas of expertise include the depiction of Muslims, inter-cultural communication, and diaspora. Canada’s Government has honoured him for his work in fostering inter-religious co-operation and Carleton has designated him Chancellor’s Professor, the university’s highest scholarly position. Dr. Karim has delivered notable lectures in North America, Asia, Africa and Europe. CBC’s program Ideas broadcast his 2007 distinguished lecture on Multiculturalism to a global audience.

His writings, translated into Arabic, Dutch, French, Hungarian, Persian, Portuguese, Spanish and Swedish, have been cited by scholars around the world. He won the inaugural Robinson Book Prize for the critically acclaimed Islamic Peril: Media and Global Violence (2000; 2003). His edited volume The Media of Diaspora (2003) is an international reference work; he has also co-edited Re-imagining the Other (2014), Engaging the Other (2014), Diaspora and Media in Europe (2018), and issues of Canadian Journal of Communication and Global Media Journal. Professor Karim’s most widely-read article is the co-authored “Clash of Ignorance,” which critiques the clash of civilizations thesis. His current research examines religious intersections, particularly in Indic-Islamic contexts.