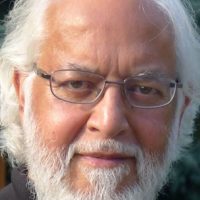 H Masud Taj is an award winning adjunct professor at Azreili School of Architecture & Urbanism with both his studios and seminars being premised on the ethics of alterity. His lecture courses at Carleton’s Centre for Initiatives in Education are on topics of Muslim Civilizations. He delivered the Keynote Address on the Ka’aba at the 2nd International Conference of Islamic Art and Architecture, Jamia Millia Islamia University, New Delhi and was the series’ invited speaker in Lahore and Isfahan (he has since circumnavigated the globe on a lecture-tour). He has delivered annual talks on the occasion of the Islamic History Month Canada (2017-2021); including a cross-cultural reading of Leonardo da Vinci in a triad series during Carleton University’s Cinquecento Celebration. His involvement with the ‘other’ extends to animals: his book Alphabestiary (with exegesis by Bruce Meyer) featured at the International Festival of Authors in Toronto 2011.

His post-professional dissertation analyzed insightful moments of “the other ” in scholarship, chess, films and architecture via the oeuvre of Stanley Kubrick. As an architect licensed in India, he was mentored by the visionary Hassan Fathy in Egypt, and as a calligrapher by the Italic master David Hosbrough. His book on Nari Gandhi (2009) apprentice to Frank Lloyd Wright, is archived in MacOdrum Library’s Special Collections while his intercultural and interdisciplinary tri-lingual book Embassy of Liminal Spaces (2009), that synthesized his poetry, calligraphy and architecture, is a permanent installation at Canadian Chancery in Bangalore, India and inducted into the Library of Parliament, Canada.