Professor of Islamic and Interreligious Studies, Assistant Principal for Religion and Society (University of Edinburgh) 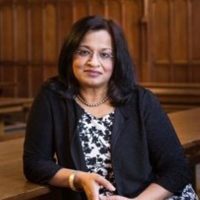 Professor of Islamic and Interreligious Studies, Assistant Principal for Religion and Society (University of Edinburgh)

Dr. Mona Siddiqui is Professor of Islamic and Interreligious Studies and Assistant Principal for Religion and Society at the University of Edinburgh. Her research lies in the field of Islamic law and ethics and Christian-Muslim relations. Amongst her most recent publications are Human Struggle: Christian and Muslim Perspectives (CUP 2021), based on her 2016 Gifford lectures, and Hospitality in Islam: Welcoming in God’s Name (Yale UP, 2015). Her current projects explore the themes of Gratitude and Loyalty in Christian and Islamic thought. In 2014 she served as a Humanitas Professor at the University of Cambridge and since October 2021, she holds a distinguished Visiting Professorship at Hartford International University. As of September 2022, she is the Jane and Aatos Erkko Visiting Professor in Studies on Contemporary Society at the Helsinki Collegium of Advanced Studies.

She is known internationally as a public intellectual and is a regular commentator in the media, known for her appearances on BBC Radio 4 and BBC Radio Scotland’s Thought for the Day and The Moral Maze. In 2012, she appeared as a guest on Radio 4’s Desert Island Discs. In April 2016, she was invited by the UK Home Office to lead an independent review of shari`a councils in the UK; the report was published in February 2018. She is a Fellow of the Royal Society of Edinburgh, the American Academy of Arts and Sciences and an elected honorary member and first speaker of the Royal Scottish Academy. In 2011, she was awarded an OBE for her interreligious work.