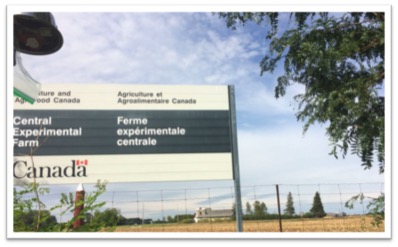 More than Farmland: Assessing the Impacts of the Central Experimental Farm on health of Ottawa’s residents

Cities internationally recognize that features of the urban built environment have dramatic impacts on a number of environmental exposures that, in turn, are linked to human health. The Public Health Agency of Canada has defined the urban built environment as “… part of our physical surroundings and includes the buildings, parks, schools, road systems, and other infrastructure that we encounter in our daily lives”. Urban built environmental exposures that affect health are varied and include air pollution, noise, heat islands, and access to parks and green spaces. As diverse as these exposures are, so too are the health outcomes they’ve been linked to. Long term exposure to air pollution has been linked to premature mortality, cardiovascular and respiratory disease, diabetes, and more recently cognitive decline. Noise has similarly been linked to many of these same health outcomes, as well as to mental health and stress. In the last few years, epidemiological studies have shown that some built environment features, parks and green spaces can help mitigate some of these harmful exposures, and on their own, offer some tangible health benefits. For these reasons, the Central Experimental Farm (CEF) plays a vital role for the health of Ottawa residents.

The CEF was created in 1886. It was one of five experimental farms across Canada developed to promote agricultural development in a time when most people lived and worked on farms. Here, government scientists would modify and develop new strains of wheat that best adapt to Canadian soils, and conduct research on animal and poultry breeding, insect and identification control measures, as well as many other activities. In 2016, the CEF still maintains a large footprint in the city of Ottawa, and is an unusual feature of the city, as most North American cities do not have such an expansive green space located centrally. It captures an area, 1100 acres, that is approximately the same size of New York City’s Central Park. Nearly one quarter of Ottawa’s population lives within the 5 km buffer that stretches out from its center. For these reasons, it is a valuable piece of land, and even more so given that Ottawa is a growing city that needs to deliver services to its residents. Consideration is being given to develop parts of the CEF including the possibility that it would serve as the home to a newly constructed hospital.

Decisions on future development of the farm are influenced by a number of competing interests, and would not be straightforward at the best of times. In the case of the CEF, the possible environmental benefits that it provides the city have not been well studied. The population health impact may be considerable as green spaces have been shown to absorb air pollution, reduce noise, and mediate heat island effect. Other potential impacts include reducing obesity, increasing physical activity, and enhance social networks in the surrounding area. Canadian studies have also shown that individuals who live in greener areas have reduced rates of mortality, and have healthier babies. At this time, it is not possible to fully understand these CEF impacts as there has been no coordinated effort to assess and describe CEF impacts on environmental exposures of air pollution, noise, and temperature in surrounding neighbourhoods. There also has been little attempt to describe historically how temperature and air pollution trends have differed between the area of the CEF and more developed downtown areas of the city.

As a team of graduate students enrolled in the Health Sciences and Technology Program at Carleton University we have begun to try and tackle this controversial topic. There are four of us (myself (Keith), Erika Brisson, Mona Ahmad, and Natasha Prince). Armed with a fleet of our own personal vehicles, including a beat-up 2003 GMC Astro van, that have been adapted to include personal monitoring devices that measure exposures on a second-by-second basis, we’ve designed an environmental sampling campaign to measure air pollution, noise and temperature in and around the CEF. For one hour every morning and another at night, we have driven in and around the CEF so that we will be able map these exposures across the farm and in the surrounding neighborhoods. In the time between our 1 hour tours, we are scampering up or down ladders to maintain a network of 41 air pollution monitors that have been scattered throughout our study area. We do this because we recognize how important an issue this is to our community. We are aware but not distracted by media reports of the debates of a new hospital location that seemingly appear on a daily basis. 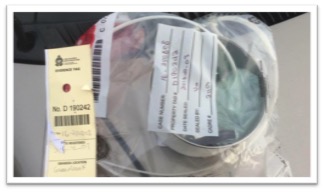 Our typical sampling day begins with Erika and I arriving at Natasha’s apartment. Natasha is the equipment manager while the daily mobile monitoring is performed by the rest of us. While we focus on driving the same circuit around the farm each day, Natasha is our team sparkplug and ensures that all of our monitors have the power, memory and various fluids they needed to continuously measure air pollution and temperature while we drive. Erika and I finish our morning sampling and replace the monitoring equipment in our passenger seats with Mona and Natasha, respectively. We must now tour our study area again and take down all of our passive monitors. On setup day, we strapped them to lamp poles and left them there for two weeks to fend for themselves. For fourteen days they have sat there, like eggs in inverted tin nests (rain shelters). Natasha and I are discovering that some of the noise meters have been stolen. Their small blinking LED lights must have been too much to resist for some. In these three instances, we are at least grateful that they spared our NO2 (nitrogen dioxide – a marker of traffic exhaust) and VOC (volatile organic compounds – markers of many anthropogenic sources) samples. Arriving at one site, we learn that an entire sampling set up was confiscated by the police, tin nest and all. It was eventually returned to us, encased in an evidence bag, but too late to make use of the data it collected. While our ‘Farm Squad’ has found this work mentally and physically challenging, we have completed our fall campaign and are now recharging ourselves for another two week sampling campaign in the dead of winter. 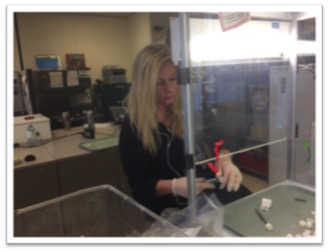 While the use of our minivan with our sampling tube sticking out the window has attracted attention from more than a few passer-bys, this form of mobile air monitoring has proven to be an effective way to describe how air pollution concentrations vary within city blocks. Ultimately, we will consolidate the data from the loops we take each day and describe how they change within and around the CEF. Our data will be used to describe how the green space of the CEF impacts nearby concentrations of air pollution, heat and noise. Importantly, they will also provide the opportunity for a future group of students to assess what impact redevelopment of CEF has on these environmental exposures. Such redevelopment seems unavoidable now with the announcement on December 2 by Heritage Minister Joly recommending the Sir John Carling site on the grounds of the CEF be made available for the new hospital.

With our data, the community will now be well positioned to monitor some of the environmental impacts of such a decision. While our next sampling campaign will be done in frigid winter conditions, we can’t think of a better place to conduct fieldwork than in a National Historic Site in the center of our city.

Note. This project is being conducted under the supervision of Dr. Paul Villeneuve and Dr David Miller at Carleton University.