Music Matters: Melodies to Nourish the Body and Mind 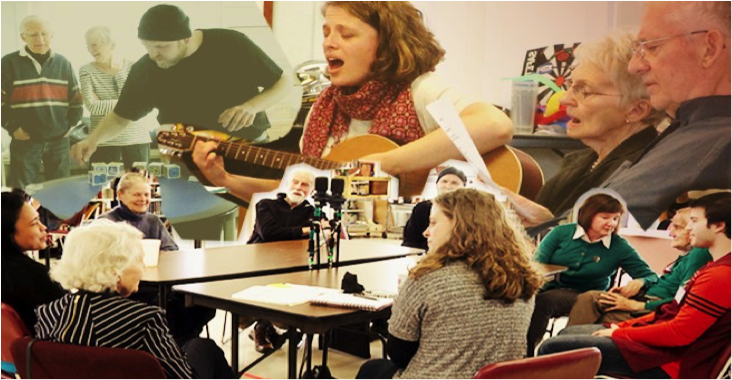 This past March, a novel music program began at Elizabeth Bruyère Hospital in downtown Ottawa, Ontario. Several individuals living with dementia and their caregivers gather each week to make music, reminiscence about the past, and connect with others. Currently in week seven of eight, Music Matters has evolved into so much more than anyone had expected. Old friends were reunited, favourite memories were recounted, original poetry and songs were composed, and impromptu dance solos soon followed. And as if this wasn’t enough, participants will showcase their work in a public performance on May 1st at the National Arts Centre. 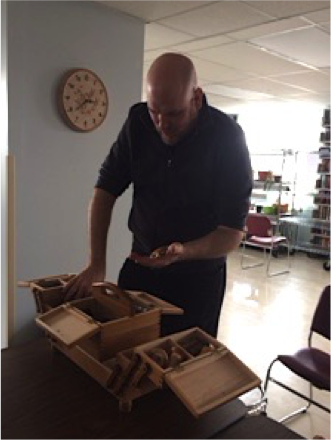 Music Matters is coordinated by Dr. Tracy Luciani, who works at Bruyère Continuing Care and is President of Artswell, a registered charity dedicated to improving the quality of life and well-being of individuals living with the effects of age, illness or injury. New tunes, vocal exercises, and guitar are arranged by Julia Churchill, a jazz musician and improviser, also from Artswell. She is joined by Dr. Jesse Stewart, a Juno award-winning music professor at Carleton University whose percussive skills keep the program going at a steady beat. Together with filmmakers Christopher Rohde and Kenneth Warner, they will create a documentary to commemorate and showcase the music-making process. And just when the level of collaboration seemed to have reached a peak, another set of enthusiasts joined the team. The health benefits of Music Matters are also being more formally evaluated by Carleton University health sciences professor Dr. Renate Ysseldyk and students Noah Latchem, Anita Sengupta, and Angela Paric. Through a series of short surveys, open-ended interview questions, and observational measures, both the group identity and the individual health benefits of Music Matters will be captured. It has been a seamless collaboration that appears to have both intrigued and benefitted the participants.

Music-making has become increasingly recognized as a cognitively demanding process that may be beneficial to brain functioning, and as such could be particularly useful in slowing cognitive decline amongst healthy, older individuals as well as those with age-related diseases such as dementia (Herholz & Zatorre, 2012; Thompson & Schlaug, 2015). Moreover, the social element inherent in music-making as a group has also been found to foster emotional regulation, social connectedness, and improved health (Dingle, Brander, Ballantyne, & Baker, 2013). With this in mind, the musicians experimented with various instruments and exercises to enhance the program and encourage socialization. During the first week, participants used an assortment of percussive tools to intensify Dr. Stewart’s hand drumming. A few weeks later, the calls of loons and chickadees emanated from a peculiar looking collection of instruments, that in concert with finger tapping and mouthed “whooshes”, filled the room with sounds of oceanside walks and rainy spring afternoons. It was a chance for everyone’s inner goof to take centre stage. 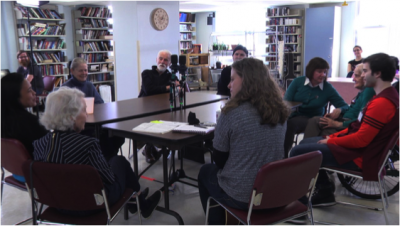 This shared musical experience also conjured fond memories and the program quickly became the grounds for storytelling. Reflections on the past and present provided the lyrical basis for a new group song that will be featured during the final performance. And on one special afternoon, a 90-year old participant living with dementia recited an original poem that captivated the audience. While she spoke, emotions became increasingly palpable and an important theme emerged. Individuals living with dementia should be embraced for who they are and who they can still become, rather than noticed for what they have lost. The Music Matters group is a community where memories, ideas, personalities, and individual quirks are all welcome with arms wide open. It is our hope that Music Matters will enhance the health and well-being of each individual living with dementia and their caregivers alike, one song at a time.

Please join us on May 1st at 2pm to celebrate Music Matters’ wonderful accomplishments!

Tickets can be purchased via the National Arts Centre

This project was also led in partnership with Alzheimer’s Society of Ottawa and Renfrew County and funded by the Community Foundation of Ottawa.

When you were young

My hugs were just a token

You were strong and loved me back

My arms were wide open

Please embrace me, hold me tight

My arms are wide open

I don’t mean to always call

Have I become a nuisance?

Are your arms still wide open?

I’m so grateful for your love

I cannot hold it in

Have patience with my failings

With your arms wide open

It’s on the tip of my tongue

It was there just a minute ago

When I lose a word

I wonder if it will ever come back

You will have to be patient

Just give me a minute

I know what I want to say

Some days my thoughts

Never to be seen again

I understand what you are saying

You make sense to me

Will you fill in my blanks?

There are three words

And if the day comes when I am silent

Remember what I say today