Home / CHAIM Blogs / Red Meat Consumption: Getting to the ‘meat’ of the issue

Red Meat Consumption: Getting to the ‘meat’ of the issue

Red Meat Consumption
Getting to the ‘meat’ of the issue 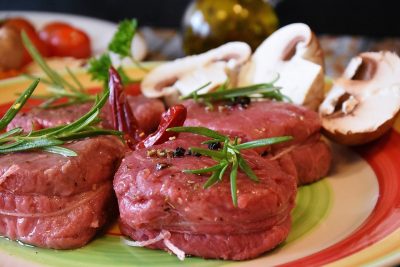 The controversy around red meat consumption and its effects on human health is a ‘hot topic’ in today’s media discourse. Recently the debate has been stimulated by a cultural shift towards vegetarianism, which frames red meat consumption as damaging to one’s health. This has, in turn, spurred responses of meat-loving advocates who tout the benefits of red meat consumption. The back-and-forth rhetoric can make it difficult to navigate the science behind the claims of each camp.

So what does the evidence tell us?

Red meat has formed an important part of North American diet for decades and is embedded into North American culture. For example, we might share ham with the family at Christmas, barbecue steaks on Canada Day, and enjoy chili cheeseburgers on Superbowl Sunday. There are many reasons for the popularity of red meat. Not only is it tasty and convenient, it has many nutritional qualities as well.

Red meat is high in macronutrients such as proteins and fats. It contains all amino and fatty acids necessary to aid the body in regular function (Williams, 2007). Furthermore, red meat is an excellent provider of minerals such as iron and magnesium, compounds that aid in healthy immune function and red blood cell count (Williamson et al., 2005; McAfee et al., 2010).

Red meat has also been shown to promote efficient DNA synthesis and memory retention through its concentration of vitamin B12 and zinc (Williams, 2007). It is high in compounds such as creatine and carnitine that aid in athletic and cognitive performance (McAfee et al., 2010; Williamson et al., 2005; Delanghe, et al., 1989); such compounds (as well as vitamins and minerals like iron and Vitamin B12) are difficult to obtain from other food sources, making red meat a valuable nutritional source.

However, red meat has gotten a bad reputation largely due to its high fat composition. Of all meat products, red meat and processed red meat naturally contain the highest level of both saturated and unsaturated fats (American Heart Association, 2016). For perspective, one 50g burger patty from McDonalds or Wendy’s is composed of 20-30% fat (Keeton, 1994; McDonalds, 2016), and one lean and trimmed 100g rib-eye steak (about the size of the palm of your hand) contains about 11 grams of fat (USDA National Nutrient Database, 2016). Excessive consumption or accumulation of such fat contributes to unhealthy weight gain and poor gut fauna; other compounds present in red meat have been linked to atherosclerosis and colorectal cancer (McAfee et al., 2010; Hu, 2003). 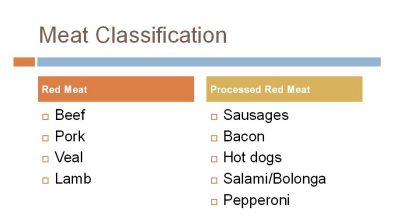 When high-fat meals such as hamburgers are consumed, carbohydrates are first metabolized and used as energy (Gropper & Smith, 2012). This leaves fatty acids in circulation until they begin to be taken up by adipose tissue, which accumulates over time and results in weight gain. Such unhealthy weight gain results in poor mental health and reduces productivity and energy during the day (Panel, 1998). Left unchecked, excessive weight gain leads to obesity, an affliction affecting approximately one-third of the North American population (Statistics Canada, 2017; Harvard SPH, 2017). People suffering from obesity also tend to have poor metabolic activity and often suffer from a variety of health problems such as poor circulation, compromised immune function, sleep apnea, depression, and diabetes (Panel, 1998; Garrow, 1999; Wang et al., 2011). Those of us with sedentary lifestyles, such as most people with desk jobs, are especially at risk (Gropper & Smith, 2012).

In addition to the disease risks carried by its high fat content, red meat consumption has been linked to diseases such as atherosclerosis and colorectal cancer. For example, the amino acid L-carnitine is a naturally occurring compound in cooked red meat. Once consumed, gut bacteria process this compound into trimethylamine-N-oxide, which has cancerous activity in humans and contributes to atherosclerosis in lab animals (Bingham et al., 1996; Koeth et al., 2013). 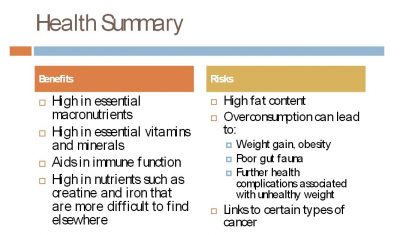 So, can we have our meat and eat it too?

The scientific evidence may suggest to us that the only course of action for our health is to eliminate red meat from our diets. However, we know that red meat is a nutrient-dense food and has many health benefits associated with its consumption. Just as importantly, red meat is a significant part of North American culture. Giving up red meat would not only mean a change of our diets, but a cultural change as well. Thus, eliminating red meat entirely is an impractical and rather unrealistic expectation for the meat-eating public.

So, what to do? It all boils down to several important concurrences across the scientific health and nutritional communities. Most importantly, the vast majority of scientific and nutritional literature agree that we are eating too much red meat (Lima & Gomes-da-Silva, 2005; McAfee et al., 2010; American Heart Association, 2016). An average meat-eating North American consumes over 200% more red meat than the healthy limit of 3 servings[1] 3 times per week (American Heart Association, 2016; Canadian Cancer Society, 2016). Health issues stemming from red meat consumption occur not because we are eating red meat, but because we are eating too much of it.

Second, because red meat often forms the main course of a meal, our diets lack significantly in nutrients obtained from plant-based foods – many of which suppress diseases such as obesity and cancer, and help the body metabolize fats (Moore and Thompson, 2013; Craig, 2006; Boeing et al., 2012). A diet high in plant-based foods is recognized across the scientific community as the healthiest diet.

And third, many nutritional benefits obtained from red meat can be found in other meat sources, such as fish, eggs, and white meat products (Canadian Cancer Society, 2016).

The clearest solution is to reduce the amount of red meat we presently consume. This reduction in red meat consumption may look different to different people depending on lifestyle and habit. Following are a few suggestions based on the evidence.

Try to consume no more than 3 servings of red meat 3 times weekly. This amount is plenty of red meat for a week: eating 2 single-patty hamburgers, an 8oz steak, and 2 servings of meatloaf in a week is still within the 3×3 rule.

[1] 1 serving is equivalent to 3 ounces of lean flank steak.

Aim for 1-2 vegetarian dinners a week. For example, replace meat lasagna with vegetarian lasagna. Not only will this help increase the amount of plant-based nutrients in your diet, it will also help cut down on red meat consumption. 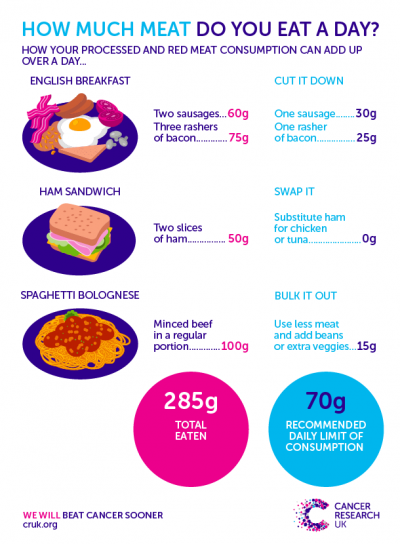 Alternatives can consist of white meat, fish, egg, and dairy products. For example, replace the salami in your lunchtime sandwich with turkey breast, egg salad, or tuna. These products are high in protein, and contain many of the health benefits associated with red meat (Canadian Cancer Society, 2016).

None of these suggestions should prevent us from enjoying a steak on date night, grabbing a Superbowl chili cheeseburger, or cutting into the ham on Christmas eve. By reducing and monitoring red meat consumption, we can enjoy the benefits of red meat while minimizing risk from overconsumption. We can, indeed, have our meat and eat it too!

Related Resources: To Meat or Not To Meat

Panel, N. O. (1998). Clinical guidelines on the identification, evaluation, and treatment of overweight and obesity in adults. National Heart, Lung, and Blood Institute. 98(4083).