Weighing the Evidence on Sit-Stand desks for Weight Loss 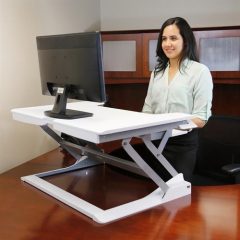 Weighing the Evidence on Sit-Stand desks for Weight Loss

Sit-stand desks are becoming increasingly popular in the workplace. If you don’t use one yourself, you probably know someone who does. While sit-stand desks are perceived to be healthier than sitting, office workers and their managers might be interested to know whether there is any scientific evidence of health benefits. In theory, sit-stand desks should improve health because when workers stand more, they sit less – and sitting is the new smoking. Last summer, researchers declared a physical inactivity pandemic given a high global prevalence of sedentary behaviour (sitting or lying down) and a growing body of evidence linking such behaviour to adverse health effects. Long durations of sedentary behaviour may be associated with higher risks of mortality, type 2 diabetes, cardiovascular disease, some cancers, and also weight gain. In Canada the prevalence of obesity is higher than ever before, contributing to disability and chronic disease. Employers are interested in minimizing absenteeism and maximizing productivity. If workplace sitting contributed to the obesity epidemic, then could sit-stand desks be the solution?

Dr James Levine, an American endocrinologist, Mayo Clinic obesity researcher, author, and inventor of the treadmill desk is a crusader for reducing sitting time. In 2005 Levine and colleagues published one of the first studies to show that sitting might lead to obesity.1 The researchers recruited 20 self-proclaimed ‘couch potatoes’ – 10 lean and 10 mildly obese individuals (5 females and 5 males per group) – and measured energy expenditure, posture, and movement over 10 days. Sleep times were similar between the two groups, however, the obese group was seated on average 164 min/day longer than the lean group. Also an inverse trend was found, showing that participants who spent more time standing and ambulating tended to have lower fat mass. To understand whether obesity caused the participants to sit more, the researchers induced weight loss in the obese group and weight gain in the lean group. However, even after weight change, the obese group sat more than the lean group, suggesting that the obese group preferred to sit. Levine hypothesized that if environments were somehow less chair-enticing, perhaps fewer people would be obese.

Around the same time, Hamilton and colleagues published a new ‘inactivity physiology paradigm’.2 They proposed that sitting causes harm by replacing non-exercise activity (Levine called this ‘non-exercise activity thermogenesis’ or NEAT). Hamilton believed that cumulative non-exercise activity may be crucial for protecting against metabolic syndrome, type 2 diabetes, coronary artery disease and obesity. The authors explained that because some of the cellular and molecular processes from inactivity are qualitatively different from not exercising, non-exercisers who sit much of the time might experience an even higher disease risk than other non-exercisers. 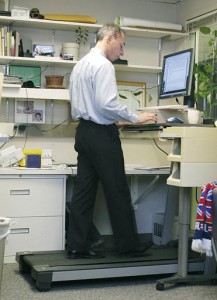 A number of recent studies have examined how much energy is expended in different postures. In a relatively large study of 50 men and women, researchers measured energy expenditure over 10 minutes for sitting, standing, and once-per-minute sit-stand transitions.3 The difference in energy expenditure between standing and sitting was 0.07 kcal/min, equivalent to 33 kcal/d over an eight-hour workday. For sit-stand transitions the difference was 0.32 kcal/min. These results align with findings from other studies done previously, suggesting relatively small differences in energy expenditure (for context, a sedentary middle-aged female expends ~1,900 kcal/d).

While controlled studies like this are informative, they do not reflect real life. In an office setting, sit-stand desks might not only lead to more standing, but also potentially to more incidental movement throughout the day. Conversely, workers might compensate for standing by changing their activity levels outside of work. Acceptability is crucial – just because sit-stand desks are provided doesn’t mean workers will use them. For example, subgroups of a certain age or health status may be less accepting, or workers might stand less over time. To test the effectiveness of sit-stand desks in the real world, long-term randomized controlled trials (RCTs) are needed that include a large number of people of different ages and health statuses.

Since 2014 at least six systematic review articles have been published, comparing the physiological or psychological effects of alternative workstations in intervention studies. Nearly all came to the same conclusions about sit-stand desks and their impact on sitting time, including the most recent review through the Cochrane Collaboration.4,5 Two RCTs had been done comparing sit-stand desks to no intervention over three months. Together these trials showed significantly less sitting in the sit-stand group by 96 min/d. A third RCT showed an 80 min/d reduction over eight weeks. Three non-randomized studies showed, within three or six months, that sit-stand desks resulted in 30-120 min/d less sitting than no intervention. Interestingly, sit-stand desks decreased sitting time at work and outside work. None of the studies measured energy expenditure, although one small study compared three-month changes in body weight, body mass index, and waist-to-hip ratio for sit-stand desk users versus no intervention and showed no difference.6 However, the authors deemed the evidence overall in this review to be low quality due to weak study designs and low sample sizes.4

“..at present, there is not enough high quality evidence available to determine whether spending more time standing at work can repair the harms of a sedentary lifestyle.” – Jos Verbeek, co-author, Cochrane Work Review Group 5 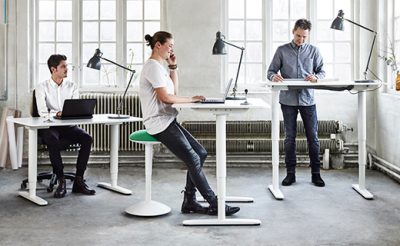 For many workplaces, the greatest barrier to sit-stand workstations is cost, with units now selling for about $150-$2,000 CAD. For employers seeking an obesity-relevant intervention, the evidence is still too limited for sit-stand desks, and unfortunately the preliminary data show little benefit in terms of energy expenditure. Still other outcomes might justify the cost. For example, the effects on musculoskeletal and metabolic health, cognition, quality of life, and work performance are being researched, but more evidence is needed to support those outcomes too. Interventions that induce more NEAT than sit-stand desks would have more impact on body weight. Treadmill desks and cycling desks are intriguing except cost is even higher than sit-stand desks and there is still limited evidence of health benefits. In 2015, Public Health England recommended that workers try to spend two to four hours per day standing and light walking rather than sitting.7 Therefore if you are planning a workplace intervention, you may need to consider making additional changes around the office besides only sit-stand desks – whether to the physical environment or to office policies about sitting – and the more NEAT, the better.