By Olivia Richards, Department of Psychology 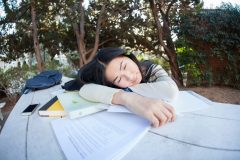 “I’m tired!” This phrase is well used, if not excessively among students on any university campus. Students are notorious for proclaiming their exhaustion, their desire for sleep, and their inability to withstand an entire lecture without dozing off. It appears that a student’s view on the required amount of sleep they need to function reflects their belief that it simply is not, and never will be, enough. A 2015 survey of 20,000 undergraduate students revealed that 91% indicated feeling tired during the past seven days, while 43.4% reported problems performing activities due to daytime sleepiness. Even if a student does get a good night’s sleep, the intensity of their fatigue rarely diminishes, and if it does, only for a short period. The question then becomes: why can’t students get a handle on their sleep habits?

It is likely that students are suffering from a phenomenon dubbed “sleep debt”, a term used to describe the mounting impacts of sleep deprivation. To incur sleep debt, a person doesn’t need to go nights on end with very little sleep. Sleep debt can even affect people who are sleeping eight hours per night (Coren, 1996). Even if a person is lacking only a few hours less sleep than is recommended, this can contribute to sleep debt. Students may be under the impression that it is the exceptional activities that contribute to sleep debt, such as binge drinking and partying until dawn, or the dreaded ritual of cramming all night before an exam. Although there is no doubt that these experiences play a role, it is often the more benign habits that are leading students to fall behind in their sleep. 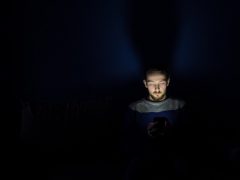 One of the primary culprits is the cell phone. Regardless of students insisting that they suffer from drowsiness, this apparently does not prevent them from replying to text messages in the dead of night.   “Telepressure” is the need to respond immediately to text messages or phones calls, for fear that people will become upset if you fail to do so (Roger & Barber, 2019). To the outside world it may appear obvious that when one is sleeping this pressure should be alleviated; however, this is not always the case. In fact, students were quite willing to give in to telepressure at night, waking up to groggily and half-heartedly respond to texts or calls.

Conversely, some may argue that they are not the type to be a slave to their cell phone and engage in a ritual of responding at three o’clock in the morning. Even if this is the case, the presence of a cell phone or other electronic device within the sleep vicinity can prevent a student from falling asleep. In fact, the blue light emitting from a cell phone or computer screen can cause a delay of sleep onset by up to one-and-a-half hours (Wise, 2018). Over time, this delay in sleep, and the periodic awakening that may also be occurring, can contribute to sleep debt.

An additional contributor to sleep debt 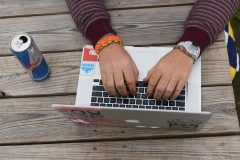 is the infamous energy drink, one of students’ favourite catch-22’s. Consuming energy drinks is often done in order to function and accomplish optimal work, but this occurs at the cost of almost immediate burnout when the caffeine begins to wear off. What students may not know is that the price of energy drinks extends beyond just the initial caffeine plummet. A recent study indicated that consuming energy drinks predicted lower quantity and quality of sleep as well as increased tiredness the following day for college students. This is yet another contributor to the potential sleep debt students experience. While students believe they’re drinking to achieve momentary efficiency, their caffeine binge may actually be robbing them of valuable time in the future. 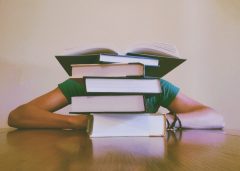 Despite the evidence, is it truly reasonable to expect students to give up their cell phones, or stop drinking sugary caffeinated beverages? In reality, probably not. Students often use their cell phones as a method to wind down at the end of the night, or as a way to mindlessly relieve stress. The energy drinks could be something a student has been drinking for years. Expecting them to change their ways on the basis of a few studies is unlikely to alter ingrained habits. One would hope that students would seize the opportunity for extra sleep at any chance they get. The shocking revelation is that the majority of students may not even be willing to go that far. In fact, one study suggested that even among those students who are experiencing a significant sleep deficit, when given the option of altering their habits, the majority did not jump at the chance to obtain more sleep (Anderson & Horne, 2008). Out of the 50% who stated they had the desire for more sleep, only 20% reported experiencing a level of unreasonable sleepiness during the day and opted to take extra sleep. Perhaps these students would rather deal with exhaustion than limit their time engaging in activities they enjoy. Indeed, the statistic likely includes overachievers who would be aghast at the idea of taking time away from their studies to sleep an extra hour or two.

All of this is not to suggest that students are dramatizing the state of their exhaustion as they wait in solidarity, zombie-like in line for Starbucks. The fact of the matter is, they probably are exhausted, and it is unlikely that students as a whole will ever reach the point where they are not unanimously tired. Perhaps then, a more accurate question is: how tired does a student need to be in order to do anything about it?!

Rogers, A. P., & Barber, L. K. (2019). Addressing FoMO and telepressure among university students: Could a technology intervention help with social media use and sleep disruption? Computers in Human Behaviour, 93, 192-199.