Home / News / A Call to Action: Collaboration and Teamwork in Scientific Research in Grenada

A Call to Action: Collaboration and Teamwork in Scientific Research in Grenada

Any time you want to achieve something great, collaboration and teamwork are a necessity, not an option. You learn this one way or another if you have ever pursued greatness, whether in the form of athletics, entrepreneurship, artistry, or academics. As there will inevitably be obstacles along the way, it would be impossible for one person to know how to solve each and every problem encountered.

In the 1969 book “Interdisciplinary Relationships in the Social Sciences”, Donald T. Campbell argues that science is conducted most effectively when researchers from different areas and disciplines collaborate on projects of overlapping interest (Campbell, 1969). As another student blog writer, Joel Sprunger, puts it, “the overlap [of common knowledge amongst collaborating researchers] allows for common ground while their respective areas of expertise covers a greater ‘surface area’ brought to bear on a specific question.” At the heart of Campbell’s idea is that with academic collaboration, we are greater than the sum of our parts. This is the concept that we will be exploring in this blog, based on our experiences in a collaborative research effort to study air pollution in Grenada.

According to the 2017 edition of the Global Burden of Disease Study, ambient air pollution presents one of the greatest environmental-related health risks. All-cause mortality relating to air pollution rose 5.8% from 4.6 million deaths in 2007 to 4.9 million deaths in 2017, most of which stems from increases in cardiovascular, cerebrovascular, and respiratory disease (Stanaway et al., 2018). While much of the world seems to be dealing with urban air pollution problems, a closer look reveals subtle differences based on geographical location. 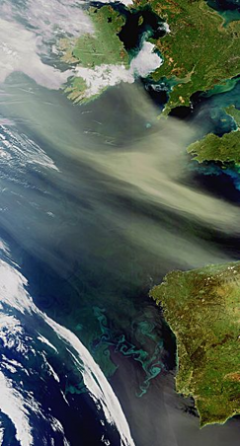 Take Grenada for example: they are a non-industrialized island nation that disposes of waste via burial and burning. A relatively large portion of their motor vehicle fleet is quite old, resulting in more fuel consumption, higher greenhouse gas emissions, and greater emissions of carbon monoxide and respirable particles. In addition, on a daily basis, large cruise ships visit the port in St. George’s, Grenada’s largest town. This poses an environmental health issue as these cruise ships idle their generators to maintain electrical supply. Perhaps the most intriguing component of air pollution in Grenada (and possibly the Caribbean) is the presence of Saharan dust. At certain times of the year, the Caribbean is exposed to masses of desert dust that are transported from the Saharan region of northern Africa. Due to a sustained drought period in the Sahara since the early 1970’s, there has been a sharp increase in the amounts of this desert dust being transported around the world. This component of air pollution is of particular interest because it coincides with a rise in Caribbean respiratory disease since the early 1970’s. Altogether, Grenada and other Caribbean states present an opportunity for better understanding sources of air pollution and their impacts on human health.

Our interest in this project stems from our experiences studying air pollution in the Canadian context. Julia’s undergraduate thesis involved looking into the impact of street design on local air pollution levels in Halifax, Nova Scotia. She conducted a study collecting baseline data on the levels of air pollutants in the downtown area. From traffic count data, the majority of vehicles present in the study were SUVs and regular cars. The air pollutants she measured for this study were PM 2.5 (particulate matter with an aerodynamic diameter of < 2.5 um) and UFP (ultra-fine particles, particulate matter with an aerodynamic diameter of < 0.1 um), both of which are parameters of traffic pollution from automotive exhaust.

Nick based his undergraduate thesis on studying air pollution in urban areas of Mississauga, Ontario. He took measurements of NOX (nitrogen oxides), NO2 (nitrogen dioxide), and NO (nitrous oxide), all of which are indicators of traffic pollution. As is common in most urban areas of Canada, traffic is usually the largest source of air pollution. Using these data, he produced a land use regression model to predict NOX, NO2, and NO concentrations in previously unmonitored areas of Mississauga. These predictions were used to estimate health risks for residents of Mississauga based on their exposure to these pollutants.

In addition to the two of us, we were accompanied to Grenada by our respective supervisors (Dr. Paul Villeneuve from Carleton University and Dr. Daniel Rainham from Dalhousie University), as well as collaborating project members from St. George’s University (SGU) in Grenada (Dr. Martin Forde, Dr. Kerry Mitchell, and their respective master’s students, Tania Khan and Solanie Bogollagama). Just as Campbell’s model for science suggested, we all had overlapping interests that involved the study of environmental health. In collaboration, we brought separate areas of expertise to the table to make our trip to Grenada a successful one. 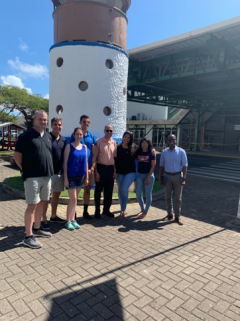 Going to Grenada, we had four objectives:

Our work in Grenada began with meeting Dr. Forde and his master’s student Solanie at SGU. There we scouted for potential locations for installing a PurpleAir monitor on SGU campus. After realizing that it was difficult to satisfy our requirements for a good monitor location, Dr. Forde suggested an alternate location on the southern tip of the island. This location presented a good environment as it was at high elevation and isolated from human activity, had consistent air flow without the influence of urban pollution, and had access to WIFI which allows us to view current and past measurements on PurpleAir’s Map. This marked the installation of the first PurpleAir monitor in Grenada.

After installing Grenada’s first PurpleAir monitor, our Canadian research team drove around the island to conduct mobile monitoring for BC and UFP. During this excursion we witnessed high levels of both particle types. This could be due to the several trash disposal trucks, construction sites, and high proportion of diesel cars that we passed during our mobile monitoring. Also, as noted earlier, the automotive fleet in Grenada is aging and produces more emissions than newer, more fuel-efficient vehicles.

During our second day of mobile monitoring we obtained consistently low levels of UFP. It was only from Julia’s past experience using this technology that she was able to determine the monitor wasn’t working properly. For example, large diesel trucks driving past us no longer caused spikes in measured UFP. For the monitor to function normally, it relies on a filter cartridge that must be soaked in alcohol before measurements can be taken. Julia made the connection that the high humidity was likely affecting alcohol absorption which could have caused the incorrect UFP measurements we saw that day.

Next on our agenda was to meet with Grenada’s Chief Medical Officer, Dr. Francis Martin to explain the premise of our project. It helped that Dr. Martin had previously done research on the Saharan dust episodes in Grenada. A key piece of information that we learned from this meeting was that the hospital records at Grenada General Hospital are paper based. We will need to convert these data to digital records if we want to analyze how daily Saharan dust exposure relates to daily hospital visits for respiratory disease. Fortunately, the two master’s students at SGU volunteered to do this conversion. 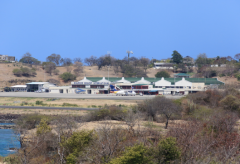 Later that day we had a meeting with the manager of the meteorological office at Maurice Bishop International Airport. We inquired about getting access to meteorological data for Grenada, and chatted with the meteorologists working there about how they identify periods of Saharan dust exposure. An exciting outcome of the meeting was getting permission to eventually install a PurpleAir monitor at this airport! Permission to install an air pollution monitor at any international airport is incredibly rare. All that was accomplished this day couldn’t have been done without the meeting arrangements made by Dr. Forde and Dr. Mitchell.

Our trip to Grenada was a productive one. While only one monitor was installed, four more locations (the airport, the Ministry of Health building, the SGU faculty members house, and a spot on Grenada’s neighbouring island, Carriacou) were identified and with the help of the SGU team, four more monitors will be installed. The mobile monitoring of BC and UFP that we completed can be used as a baseline for further research related to these particles. Moreover, as there is minimal research on the relation of BC and UFP, and this study will help fill in that knowledge gap. In addition, the prospect of installing a PurpleAir monitor at the Maurice Bishop airport is novel.

Collaboration is what bound this project together, with each individual bringing their own expertise to the table. There was also specific knowledge about the island learned by talking with locals; this aided immensely in finding suitable locations to install the PurpleAir monitors. The success of this project will rest on the partnerships that have been established between universities. Thank you to everyone who made this project possible and to Carleton University for the International Seed Grant that was awarded to Dr. Villeneuve to provide funding support to this research.

Nick is a 1st year M.Sc. student in Health Sciences at Carleton University in Ottawa.

Julia is a 4th year B.Sc. student in Earth and Environmental Sciences at Dalhousie University in Halifax.