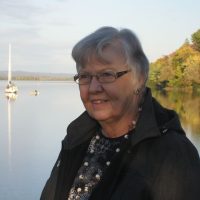 Barbara Garner came to Carleton in 1967, teaching one year as a sessional lecturer before a position in Renaissance Literature became available. She received funding from Canada Council, Imperial Order Daughters of the Empire Overseas War Memorial Scholarships, as well as a post doctoral Ford Motor Company Research Grant, the latter held at the University of New Brunswick where she had received her Honours BA and the Government of France Bronze Medal for Excellence in French.

Dr. Garner has served on various committees in the university, acted as undergraduate advisor in both the Department of English and the College of the Humanities, and was on the planning committee that established the College of the Humanities. She has taught core courses in English, and in her specialties, Renaissance and Children’s Literature, at both the undergraduate and graduate level, and supervised numerous M.A. theses, research essays, and doctoral students from Germany and Canada in specialized work in Children’s and Canadian and American Literature. She also taught honours seminar courses in Canadian Literature that include: ”Differing Solitudes” which focused on L.M.Montgomery’s writing, novels by Hugh MacLennan, and the writing of Gabriel Roy (2000-2004), and The Poetry and Prose of Bliss Carman and L. M. Montgomery (1992-95).

Dr. Garner became known as a Harry Potter specialist by offering a fourth year honours seminar entitled: “Wizardry Fantasy, Magic and the Harry Potter Phenomenon” (2000-2004,) also open to humanities students, and wrote the J.K. Rowling entry for The Oxford Encyclopedia of Children’s Literature, (2006). She has been interviewed many times on radio and television about her research interests in children’s literature. Dr. Garner has been active in the International Children’s Literature Association (ChLA) since 1984, serving on a number of committees and as President in 1997-1998 when the conference was held in Paris, France. She served on the ChLA’s Phoenix Award Committee (2008-2011), whose members read hundreds of juvenile works each year to determine the winners of the prestigious Phoenix and Honor Book Awards.

Dr. Garner has published on Natalis Comes’ Mythologia, Francis Bacon, Lucy Maud Montgomery, Canadian time slip fantasies, and the critical reception of Louis Hémon’s Maria Chapdelaine. In 2013 she published a retrospective of the critical reception of Anne of Green Gables since 1908 entitled “A Century of Critical Reflection on Anne of Green Gables” in Anne Around the World: L.M. Montgomery and Her Classic (McGill-Queens UP 2013, 63-80).

Her 2014 research focuses on L.M. Montgomery’s configuration of Rilla of Ingleside as a documentary of the effects of The Great War (1914-1918) on the Canadian Nation, and “The Significance of the Bombing of Pearl Harbor in Under The Blood-Red Sun by Graham Salisbury, this year’s Phoenix Honor Book Award winner and a novel that is compulsory reading in most American middle schools. She continues her research on L. M. Montgomery’s religious beliefs as reflected in her journals, correspondence, and fiction.

Professor Garner, now in her fourth year as Mentorship Coordinator in the College of Humanities enjoys pairing students with mentors who will help them to achieve their career goals.

Canadian Children’s Literature, Sixteenth and Seventeenth Century English Prose, Poetry and Drama, the Mythological  Handbook Tradition, especially the influence of Natalis Comes on English Literature, the Poetry and Prose of Bliss Carman, and the Oeuvre of L.M. Montgomery.