For the sixth installment of the Global Water Institute’s informal talk series, Water Conversations, we heard from Public Policy and Administration PhD candidate Anteneh Belayneh, who began his research into water allocation and water markets in Southern Alberta in 2014.

Alberta only has 2.2% of Canada’s renewable freshwater supply, and while 80% of Alberta’s population resides in the South, 80% of Alberta’s freshwater is in the North. Irrigation is by far the most significant use of freshwater in Alberta, accounting for 75% of consumptive use and 75% of water licenses. The province of Alberta is also Canada’s “irrigation capital”, with 65% of the entire country’s irrigated land within its borders. At the same time, Alberta sports one of the few semi-arid climates in Canada, with scant yearly precipitation and a highly variable climate. As a result, water scarcity is an enduring concern, and drought is a recurring occurrence. In some parts of the SSRB, more water is already allocated than is actually available; should there be 2-3 years of consecutive drought, there won’t be enough to meet the demands of users. This concern is only becoming more pronounced in the face of development, growing communities, climate change and the possibility of changes in river volume. And yet, a very peculiar water allocation system persists. 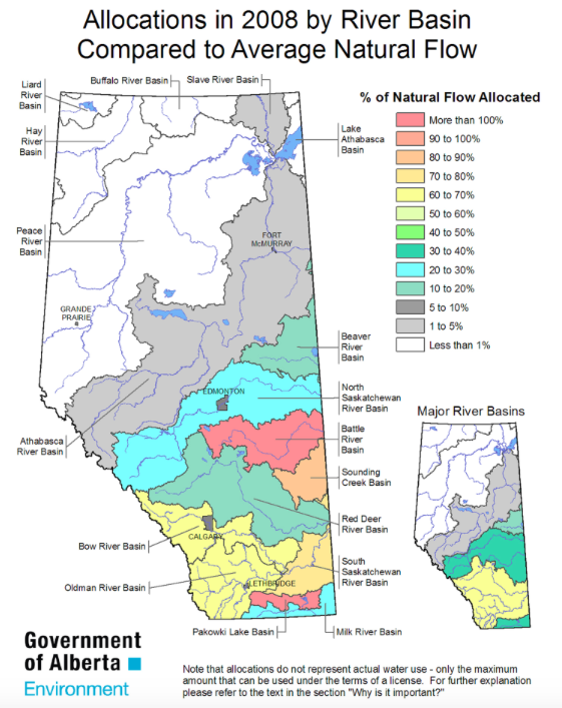 In Alberta, water is allocated using a prior allocation regime, according to a “first in time, first in right” principle. It was implemented in 1894, when the government’s concern was to encourage settlement and development in Southern Alberta. The North-West Irrigation Act (NIA) eradicated riparian (river-side) rights and established a ne 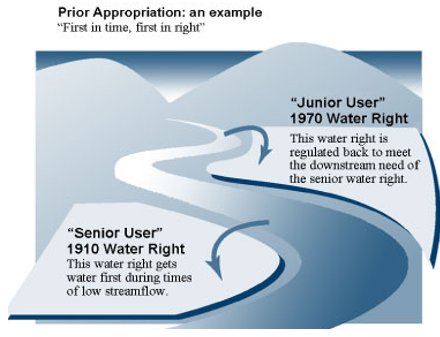 w system where all users had to apply for a license. Under the new system, each water license was tied to a tract of land, to prevent monopolization of water licenses and permit development away from water sources. As irrigation was thought to be the key to intensive agriculture and settlement, the water allocation regime was designed to facilitate irrigation, and the “first come first serve” modus operandi was designed to incentivize farmers to stake their claim early and rapidly develop irrigation systems. The older the license held by a user, the higher that user is on the priority list, and older licenses have access to the full amount of water they require before newer users are given access, regardless of use. As an added incentive, the government paid for the construction of the extensive network of dams, canals and water storage reservoirs that this would require. To facilitate development, the diversion of water to wherever it could be used was highly encouraged.

Unsurprisingly, the system designed to encourage expansion at any cost over a century ago is struggling to accommodate today’s emerging water uses and growing populations. A cap on licensed allocations to irrigation was issued in 1991 and water trading was introduced for current license holders. After a drought in 2001-2002, a moratorium was announced on issuing new licenses in tributaries of Oldman River. By 2005, total water allocations exceeded water flow in the basin.

Over time, concerns about overuse and water scarcity have become more prevalent, and public support has shifted in favour of demand-driven allocation policies such as full cost pricing. The Oldman Dam built in 1986 at great expense to the province became a rallying point for environmentalist, conservationists and First Nations rights activists. With Ralph Klein’s election in 1992 came the political will to reduce the province’s debt, and the water management infrastructure that was central to Alberta’s existing prior allocation system – for which the province bears the majority of costs – came under scrutiny. But the agricultural coalition of Alberta still wields a lot of political clout. Attempts to put a market value on water aligned with government priorities, and 85% of public support, but irrigators profiting under the status quo ultimately won out. Full cost pricing was rejected and a two tier licensing system was introduced. While new water licenses had an expiry date and were subject to restrictions in the interest of the environment and the public, older licenses were grandfathered in and retained the same privileges. No costs were imposed on historical water use patterns, and license transfers (a lease-like arrangement at the discretion of the license holder) were introduced, creating a valuable asset for old license holders.

What the future holds for the SSRB

Studies have shown that there is potential for efficiency gains from reallocation through trade (such as with the establishment of a water market.) But the existing system remains a significant constraint. Irrigation districts consistently prefer to use water license amendments rather than to sell water. Amendments allow irrigators to maintain traditional water use patterns, retain long term control, be exempt from the extensive regulation that comes with water trade (regarding respect of public interest, environmental impact, etc.), and gain a valuable asset from longstanding water licenses.

As part of his PhD work, Anteneh Belayneh developed a model of water allocation and supply in Southern Alberta, combining institutional constraints, water demand projections, and climate projections. The model included municipal, agricultural and environmental users. Once reduced streamflow conditions according to climate projections were integrated, there was no feasible solution to satisfy all users, even when holding demand constant (in reality, demand is expected to continue increasing.) Only when environmental constraints (estimates for instream flow requirements for aquatic habitats) were relaxed could the model allocate sufficient water to meet all license user demands. Astoundingly, as the environment is not a licensed user, or considered a legitimate use, this constraint would be the first to be relaxed in a period of scarcity.

In summary, while there are potential economic gains from water reallocation, the water market and other reallocation instruments are layered on top of a regime that protects existing patterns of water use, pays little attention to climate change projections, and assigns little importance to ecosystem services. Projected streamflow reductions due to climate change are likely to result in physical water scarcity and shortage, and as other cases around the world have shown us, could result in irreversible changes to the Alberta landscape.

You can see Anteneh’s PowerPoint presentation here: part 1 and part 2
Should you have questions about his work, you can contact him at AntenehBelayneh@cmail.carleton.ca

Join us next month for a conversation with Professor Paul Villeneuve of Carleton’s department of Health Sciences on the effects of blue and green spaces on mortality in Canadian urban settings!