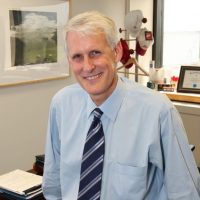 Jerry Tomberlin is Provost and Vice-President Academic at Carleton University, in addition to Professor in the Supply Management Group at the Sprott School of Business.

He is active with AACSB International where he is a member of the Board of Directors and the Continuous Improvement Review Committee. He is also Past Chair of the Board of the Canadian Federation of Business School Deans.

Prior to joining Sprott in 2008, Tomberlin held a variety of positions in the John Molson School of Business at Concordia University in Montreal, including Dean, Associate Dean of Research and Graduate Studies, as well as External Affairs, Department Chair and Academic Director of the MBA program. In addition to Concordia, he has taught at the University of Southampton in England, Baruch College of City University of New York, and l’École Supérieur des Sciences Économiques et Commerciales in France.

He holds an MA and PhD in Statistics from Harvard, a Master of Public Health in Biostatistics from Michigan, and a Bachelor of Science in Mathematics from Florida State. He has published many refereed articles and conference proceedings.

His principal research interests are data analysis, statistical applications in casualty actuarial science, employment discrimination and transportation, the design and analysis of sample surveys, and the impact of academic business research.