Anatomy, Geology and Their Influence on Leonardo’s Art 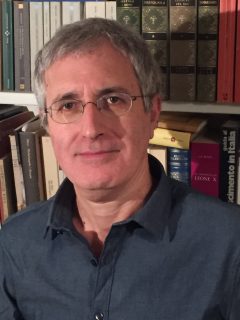 Department of Philosophy, University of Florence

Domenico Laurenza is a historian of science and art with a scientific background. Laurenza is specialist in the history of the relationship between art and science, as well as of the history of anatomy and geology. In particular, he is an expert of Leonardo da Vinci work. He is scientific consultant of Schroeder Arts (New York) and Museo Galileo (Florence). Laurenza has been a professor and research fellow at various Italian and foreign universities, including McGill University in Montreal, and Columbia University in New York. He is the author of several books on Leonardo and the Renaissance including; Leonardo on Flight (John Hopkins University Press 2007), Art and Anatomy in Renaissance Italy (New York, The Metropolitan Museum of Art and Yale University Press 2012), and more. Most recently, Laurenza is the co-curator with Martin Kemp of the new edition of Leonardo’s Codex Leicester (Oxford University Press, 2019, forthcoming), as well as a member of the Commissione per l’Edizione Nazionale dei Manoscritti e dei Disegni di Leonardo da Vinci.

Laurenza will discuss how and why an artist turned into an anatomist and, at the same time, studied the earth like a scientist. He will dig deeper into what Leonardo’s scientific studies consisted of in these two fields, in which perhaps, as a scientist, he achieved the best results. These studies were the connections with his artistic work through the representation of the human figure and landscape, furthering the connections with his scientific research between the study of the human body or microcosm and the study of the body of the earth or macrocosm? The lecture will try to provide an answer to these questions and will be an occasion of synthesis between the researches dedicated by Domenico Laurenza to Leonardo’s anatomical studies and, more recently, Leonardo’s geological work. In particular, with regard to this last field, the lecture will anticipate new evidences emerged during the preparation of the new edition of Leonardo’s Codex Leicester, currently in print (Oxford University Press).