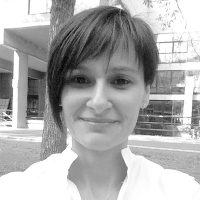 Federica Goffi’s writings and research bring to focus the matter of time as design material, in its threefold nature of time, weather, tempo. This includes explorations researching architectural representation and imagination; built conservation, conversion and adaptive reuse projects; the relationship between music and architecture. She published articles and book chapters (Routledge, AD, ARQ Cambridge, OBL/QUE, In.Form, Interstices, INTAR, Scroope). She holds a PhD in Design and Research from the Washington-Alexandria Architecture Center (WAAC, VT), which explored theoretical questions pertaining change within mnemic buildings and resulted in a book titled: Time Matter(s): Invention and Re-Imagination in Built Conservation published by Ashgate, London (July 2013). She recently edited a book titled: Marco Frascari’s Dream House: A Theory of Imagination published by Routledge, London (April 2017). She is a licensed architect in her native country.

She is currently exploring a research agenda delving into architecture in conversion, the cultural and emotional aspects of design, how details define our sense of place over time, questioning the possibility to sustain unfinished adaptable details, and exploring the concept of complete buildings that do not have a fixed image.

She is co-editor with Paul Emmons and Jodi La Coe of the forthcoming book, Ceilings and Dreams: The Architecture of Levity (Routledge 2019), and editor of a book curated in collaboration with the PhD and MAS students of the ASAU titled, InterVIEWS: Insights and Introspection on Doctoral Research in Architecture (Routledge 2019). She is co- organizer with Mary Vaughan Johnson of the Frascari Symposium IV, The Secret Lives of Architectural Drawings and Models: From Translating to Archiving, Collecting, and Displaying, that will be hosted at the Department of Architecture and Landscape, Kingston School of Art, England in 2019.