The CH-149 Cormorant Simulator combines detailed out-the-window scene graphics with a complete physical cockpit with a highly representative flight model and aircraft systems simulation. It can be configured to provide either a full-motion, six degrees of freedom experience, or motion cues via a motion cueing seat. 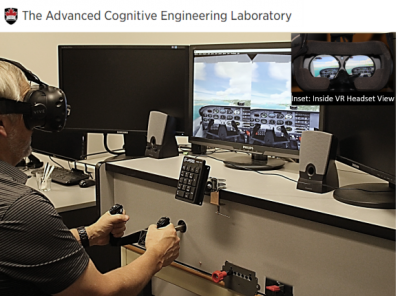 Using the fuselage of a 1966 Cessna 172 Skyhawk our simulator is equipped with real gauges, sound, intercom and radios. ATC can be emulated and detailed scenarios involving other aircraft and changes in the flight conditions can be scripted and controlled. This simulator is being used to support ACE Lab research on cognitive health and pilot safety as well as research on biometric indices of mental workload. The CASARA Virtual Trainer (CVT) is a complete self-contained simulation system developed to support the training of Civil Air Search and Rescue Association members. The system offers a detailed training syllabus including demonstration simulations for both spotter and navigation trainees. The device itself is a rugged shipping container that is easily “closed-up” for shipping and transportation. More than eighty units have been distributed across Canada. The CH-146 Griffon helicopter simulator provides a development and testing ground for innovative instrumentation, sensor and flight aid tools. The simulator is rapidly reconfigurable and can be used to sample and collect over 80 measures of performance at 60 hz. An experimenter operating system allows the scenario manager to manipulate entities and the environment in real-time. The simulator is HLA-based and can be linked in real-time to other HLA-enabled models and/or simulators for distributed simulation activities. The Moog Motion Platform provides approximately 25 degrees of motion across six degrees of freedom. With a payload of 2200 pounds it is capable of supporting any number of structures or cockpits where simulated motion is desired. It has been used in numerous studies with the goal of assessing to what extent motion interacts with immersiveness. The FaceLAB 4.3 system developed by Seeing Machines allows us to track eye, head and eyelid movement in real time. It features two lens cameras, three IR sensors and can be installed in virtually any environment. Operating non-intrusively, with no head-mounting or magnets required, it is robust in handling eye occlusions and even with the subject leaving the viewing area.