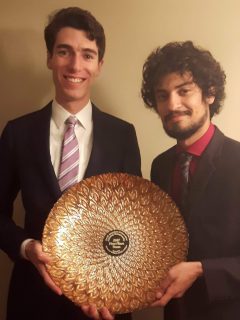 Hosted by Hobart and William Smith Colleges, Carleton was the only Canadian team to advance to the elimination rounds and won the quarter- and semi-final before taking the Grand Final.

Both are members of Carleton University’s Debating Society. Ahluwalia is a fourth-year student in the Bachelor of Public Administration and Policy Management (BPAPM) program, while Gallagher is in his first year of a Master’s in Political Management, having already graduated with his BPAPM.

More information about the event is available here.