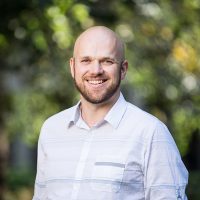 Liam O’Brien, Ph.D., P.Eng. is a full professor in Civil and Environmental Engineering at Carleton University. He is the principal investigator of the Human Building Interaction Lab, which consists of a team of 15 researchers with diverse backgrounds in engineering, architecture, and psychology. His team is developing occupant-centric design processes, building code, and controls for high-performance buildings. He has authored over 150 publications and two books on this topic. He is the Operating Agent of IEA EBC Annex 79: Occupant-Centric Building Design and Operation and the past president of the Canadian chapter of the International Building Performance Simulation Association.

Liam (William) O’Brien, Ph.D., P.Eng. is a full professor for Carleton University’s Architectural Conservation and Sustainability Engineering program and the principal investigator of the Human Building Interaction Lab. The HBI Lab includes a team of over 15 researchers with diverse backgrounds in civil, mechanical, and electrical engineering, architecture, and psychology, who focus on design and control of energy-efficient buildings, with a specialization in occupant behaviour. Prof. O’Brien has worked with approximately twenty industry and government partners and raised over $3-million in the past five years. He has authored or co-authored over 150 peer-reviewed publications and co-edited two books on net-zero energy buildings and occupant research methods. His graduates are professors and researchers in government laboratories and industry R&D departments. He has a wide network of research collaborations due to leadership positions on three International Energy Agency Tasks and two NSERC Strategic Research Networks. Prof. O’Brien is currently the Operating Agent for the five-year, 100-researcher International Energy Agency Annex 79, titled “Occupant-centric building design and operation”. He is heavily involved in the building design and research community, including serving as Past President of the Canadian Chapter of the International Building Performance Simulation Association and Faculty Advisor for ASHRAE. He has chaired two academic conferences, facilitated educational workshops, and given numerous keynote and plenary talks. He has won several prestigious awards including the Carleton Research Achievement Award, Ontario Building Envelope Council Rising Star Award, the Ontario Early Researcher Award, and the International Building Performance Simulation Association (IBPSA) Outstanding Young Contributor Award.