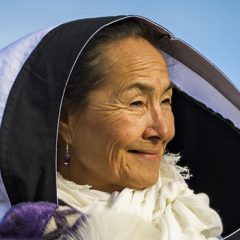 Martha Flaherty was born in Northern Quebec and belongs to one of the families that were relocated from Inukjuuaq, Nunavik to Grise Fiord, Nunavut on Ellesmere Island in the 1950s. Growing up traditionally in a family that was closely connected to the land, Martha learned at an early age to sew, prepare food and hunt. She also attended English schools in Carcross, Yukon, Churchill, Manitoba and eventually went on to attend Thebacha College in Fort Smith, NWT, for Nursing. Martha also attended Carleton University in Ottawa for certification in Teaching a Foreign Language and Journalism.

Because of her excellent leadership, communications and interpretation skills, Martha has held many positions across Canada and internationally as an Indigenous women’s leader and advocate as well as a long-time professional Translator-Interpreter. Martha’s passion for both learning and teaching Inuktitut, and for brokering reconciliation between Inuit, Qallunaat (white people) and First Nations peoples in particular, make her teaching entertaining as well as informative.

Inspired by her great grandfather, Robert Flaherty’s film titled Nanook of the North, Martha co-wrote and produced her own film titled Martha of the North as a result of her re-location experience. She also has worked with the National Film Board producing a series of Inuit culture vignettes. Earlier in her career, she was a host of her own TV show titled Tuqavut, a talk show with special guests discussing various Inuit subjects. There have also been several books and magazine articles she has been involved in regarding the same subject matter. She is also an avid craftsperson who likes to sew clothes, do beadwork, drawing, and some painting. Martha is a former President of Pauktuutit, the Inuit Women’s Association of Canada as well as an Executive member of the Inuit Taparit of Canada, better known today as ITK. She has travelled extensively throughout her career and has met many dignitaries including Desmond Tuutu, Prince Charles, and the former Prime Minister of Canada Pierre Trudeau, to name a few. Martha has three children and several grandchildren and makes her home in Ottawa. 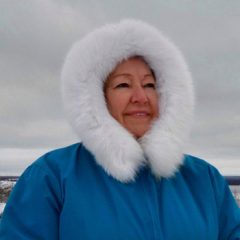 Nobel Peace Prize nominee Sheila Watt-Cloutier is in the business of transforming public opinion into public policy. Experienced in working with global decision-makers for more than a decade, Watt-Cloutier offers a new model for 21st century leadership. She speaks with passion and urgency on the issues of today — the environment, the economy, foreign policy, global health, and sustainability — not as separate concerns, but as a deeply interconnected whole. At a time when people are seeking solutions, direction, and a sense of hope, this global leader provides a big picture of where we are and where we’re headed.

In 2007, Watt-Cloutier was nominated for the Nobel Peace Prize for her advocacy work in showing the impact of global climate change on human rights — especially in the Arctic, where it is felt more immediately, and more dramatically, than anywhere else in the world. Watt-Cloutier is an Officer of the Order of Canada, and the recipient of the Aboriginal Achievement Award, the UN Champion of the Earth Award, the Norwegian Sophie Prize, the Jack P. Blaney award for Dialogue, and the Right Livelihood Award, which is widely considered the “Nobel Alternative”.

From 1995-2002, Watt-Cloutier was elected the Canadian President of the Inuit Circumpolar Council (ICC). She was later elected in 2002 to become the International Chair of the ICC, representing the 155,000 Inuit from Canada, Greenland, Alaska, and Russia — she held this post until 2006.

Widely recognized for her influential work, Watt-Cloutier gave a TEDx Talk in 2016 titled “Human Trauma and Climate Trauma as One”. She is also the author of the memoir, The Right to Be Cold: One Woman’s Story of Protecting Her Culture, the Arctic and the Whole Planet, which was nominated for the 2016 BC National Award for Canadian Non-Fiction and the Shaughnessy Cohen Prize for Political Writing. In 2017, the book was shortlisted for CBC Canada Reads, defended by Chantal Kreviazuk. Watt-Cloutier was also shortlisted for the Kobo Emerging Writer Prize.